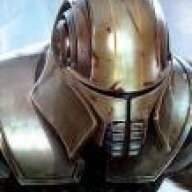 This armband was used by Nomi Sunrider, a former Grand Master of the Jedi Order who showed reluctant to train with the force in the first place; her armband is specifically designed to battle those using the Dark Side of the Force. Quvox, being a student of history and being able to relate very deeply to a reluctant Jedi who just wanted to do the right thing, decided to seek out any artifacts of Master Sunrider he could find, so they would be of use rather than left to gather dust.

Finding a trail he could follow, Quvox made his way to the Onderon system, tracking the movements of a previous owner of the armband to the moon of Dxun. Making his way through the jungle and avoiding the dangerous predators that lurked within it, he eventually found the armband, through much trial and error, hidden with a locked container that actually contained a solvable puzzle; after many hours, the box was open, and Quvox had the artifact he was looking for.

THIS IS A CANON ITEM​

Quvox said:
Light Switch: This armband is particularly useful for a Jedi, providing them with strength in countering those using the Dark Side, their most common enemy.
Click to expand...

How exactly? Could you qualify this a bit more please.

Alric Kuhn said:
How exactly? Could you qualify this a bit more please.
Click to expand...

I've done my best to try and clarify that strength a bit more, hopefully it's alright.

Don't forget that this will still need to be claimed in the canon items thread before use.

Approved Tech The Seven Husbands, a set of alien artifacts