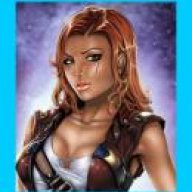 PERSONALITY Niki is very quiet and prefers to play the game of silence, she barely ever speaks but when she does it's usually in the form of a mocking yell, or a usually used to call someone out....she is not afraid to speak her mind and will always do so whenever she feels the plan of stupidity has been enacted, she has at times been considered to be a "Rogue of a Woman" and is known to be very force sensitive, she prefers to use guns, and other more primitive weaponry rather than using lightsabers.

REBEL/ROGUE: Niki is a born rebel and so she believes that the best solution to a wicked government is to use stealth attacks and espionage, she is one to go Rogue on every mission and at times prefers to work alone, she considers herself to be a one-woman-army and usually will not work part of a team unless the other parties in the team gain her respect and loyalty. Niki is a Rebel because she does not believe in tyrannical or corrupt government should be allowed to breathe.

Strong Mind: Niki is of a very strong, sound mind....being a Vortek she is uneasily influenced by the force and is almost impervious from a mind trick of any kind since her race is very resistant to mind tricks of any type.

Determination: Niki is very determined of a soldier, she works out frequently and keeps her body is extreme shape but she also is a skilled and determined combatant, one reason for her dislike for using lightsabers and preferring to use guns that have been imbued with the force.

Heart, Body, and Soul: Niki is very compassionate for others, it hurts her to know that others are being hurt by corrupt and cruel governments, she doesn't necessarily show it due to considering the show of emotions in public is very weak and very pathetic but deep down inside she cries out for the safety of others, she also cannot ever be seen as being emotional or close to anyone due to past experiences.


Growing up on Vortusa Niki had a wonderful life, her parents were scientists and her own brothers were soldiers, she was always the youngest of her and her five siblings, as she grew into a young lady she started having urges and desires to fight and to bring about conflict, she would always venture into the arctic parts of the planet to hunt a very rare and dangerous massive beetle that lives on the planet. This was a training point for Niki as the beetles were known to consume Vortek is one bite due to their massive forms.

As Niki often hunted the giant beetles she would always have a sniper rifle and a couple hand guns with her with stun and cryoban grenades, she would hunt so often she became very skilled with weapons, on one such occasion she hunted a giant beetle and the thing decided to charge her, she looked at it and fell to her back and began to fire off on it with her blaster rifle, she couldn't put it down since the thing has massive armor on it's hide and is very well protected so she lobbed off one stun grenade and shortly afterward she lobbed off a cryoban grenade and found they did the job, the stun grenade stunned the massive insect and the cryoban grenade froze it allowing her to then send a frag grenade into it by her rifle and blow it up.

Niki quickly grew into a soldier and found her life of an infiltrator and black ops to be a reprieve from her daily activities since she would often be used to infiltrate enemy strong holds and bring back the enemy captains or leaders, she did this on so many occasions and found it was a good way to prove her worth, she often made it back during training exercises safe and proven to be an effective soldier.

After some time she grew bored and left Vortusa for a new life, she found her previous one was uneventful since the Vortek Civil Conflict started to calm down and the planet was no longer threatened with mass genocide that an old general and a member of the royal family decided to threaten it with, she found her life would be more eventful if she were to leave Vortusa behind, this is how she came to the a Freelance Mercenary and being partially employed by the Lords of the Fringes.

Niman: Whenever she uses her lightsaber she carries with her this is her preferred combat form for lightsaber combat, she is very skilled with Niman even though she has only practiced it with her own lightsaber.

Vaapad: She only uses Vapad whenever she needs to be overly aggressive, she will stop at nothing but injuring her opponent whenever she is using this form.

Soresus: this is her preferred defensive method, she is very educated and trained for it and it is the method she uses whenever she needs to be, or is forced into defense with the ability to be reserved.

Domination: Being a Vortek woman she is, at times, inclined to giving up control to her partners, or romantic interests...she would is one person who does find it exciting to be controlled and dominated.

Music: Niki absolutely loves music and cannot be without it for a long period of time, she is usually seen with her ipod and a pair of earbuds in her ears and listening to alternative rock songs, and some times classical, and jazz music....she loves her music and it's the only thing that keeps her nerves calm.