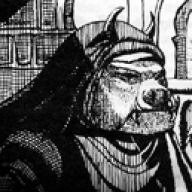 STRENGTHS AND WEAKNESSES (Required: 2 Weaknesses Minimum) :
+ Uses prayer and meditation to direct this power towards healing.
+ Great strength and a large powerful physique

- Girth - She can get stuck between walls or tight corridors.
- Speed - She can't quite get past normal waddling speed.
- Non violence vow.


BIOGRAPHY:
Despite her rather large toothy and ferocious mug, thick snout, close set eyes, tusks and horns, Mother Arg'garok is actually quite quiet, pious, and calm. The way of the Nuns was one of calmness and passivity rather than violence, which they were encouraged never to use. Although a little bit slow, in waddles and mind, she is quite happy to help out. She is slow of speak and slow in words, but quite well versed in the healing art not only through the Force but through conventional means.

She has a number of parasitic bloodsuckers native to Gamorr called morrts. She shows great affection for the creatures and considers them adorable pets. They are called respectfully; Ugg, Ta, Cha, Tch, Oola, and Gweek.

She is also well versed in Gamorrean opera, which is composed of loud grunts, snorts and growls.