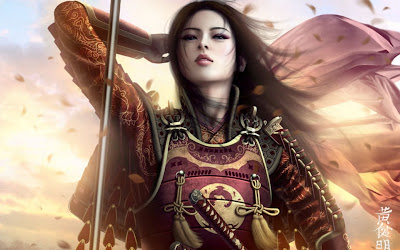 STRENGTHS AND WEAKNESSES (Required: 2 Weaknesses Minimum) :
+Agile
+Loyal
+Lives by a code
+has great compassion, if she sees someone suffering she will do whatever she can to help them
+ / - Has discipline, but if she does not practice it every day she may forget
+has great respect for those who have earned it
-Can be blinded by duty
-Is fearful of letting her family down, and not finding a way to restore her mother to her family
-is not fully aware of all that happens in the galaxy

5'6, jet black hair that shines under light, dark eyes almost black but little flecks of gold within. Toned she looks like she can take care of herself. She weighs about 130 pounds sometimes less, sometimes more. She carries a kytana sword sheathed across her back as the warriors of old. She wears red armor embellished with the symbols of her family. When called to formal occasions she wears a red and gold cloak, the medallions attach to her shoulders and allow for the cloak to flow freely about her.

She is from the outer rim, within the Yminis system, the Morgania sector. Her mother Akemi hovered only her only daughter, protecting her as if she were a precious jewel. Akemi often would tell Hitomi that her father had not been able to stay, from the shape of Hitomi's ears and the color of her skin it was assumed by many including Hitomi that her father was an offworlder. Her mother had been outcast from her family for dishonoring them in two ways one for having a child without the benefit of marriage, and two for chosing an off worlder.


The great house of Mirumoto, well known through the morganian sector but not outisde to the galaxy. The name of Mirumoto was associated with cruise liner ships, and hotels throught out the galaxy. But few knew the faces of the family behind the name the outer rim allowed for them to remain anonymous. Hitomi was going to change that. She wanted everyone to know her family.


To prevent the tarnish of her mother's actions from touching Hitomi she was claimed as a daughter to her grandparents house, Asami and Isao. Under the watchful eyes of her grandparents she was given opportunity for an education, sword play, culture, and to learn the honorable way of living life. Her mother outcast was often treated as a slave by her own parents, never acknowledged. Hitomi knows, and understands why the family is so. In her mind though her mother will always be her mother, she who suffered greatly at great cost.


Hitomi swore she would find her father and show him what his actions did to her family, to her mother. Now at age 23 she seeks out a sword master to teach her, she knows to find her father who dishonored her mother so she will need a multitude of skills, and resources. This begins her journey to find him, and acquire the skills needed to kill him when she finds him.

A very well put together character. I see great things in store.

Character Bio
She looks very much like a yovshin swordsman from Atrisia actually. That pic is pretty epic.

@[member="Akio Kahoshi"], *bows to the Emperor" Your most honored majesty perhaps that is the other part of my heritage yet to be discovered.

Character Bio
OOC: @[member="Mirumoto Hitomi"] is one of my favorite characters from Legend of the Five Rings. Good luck with your character.
Garith's Armor[SIZE=9pt] Garith's Sword Twilight Lightsaber [/SIZE] Character Bio
Weird question... were you ever on The Green Council?

[member="Count Aretine"], no Count I was not.

If you do not enter the tigers cave, you cannot catch its cub.​
Hitomi's Bio
You must log in or register to reply here.
Share:
Share
Menu
Log in
Register
Install the app
Top