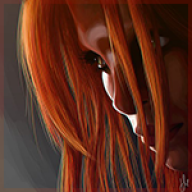 + Mirax is a Felacatian, a polymorphic feline native to the planet Felacat. In her normal state, she is a tall humanoid being with near-human characteristics. The tell tale sign of her alien heritage is her short fur and long tail, along with a hyper developed sense of balance, perfect night vision, and hyper fast reflexes -- all a result of her feline evolution.

+ Mildly psychometric: Able to vaguely pick up impressions and traces of information about an object she touches and the events that have surrounded it. Currently only available on very personal items.

- When she is forced to stand hyperspace for an extended period of time, or when she experiences any level of stress, her body begins to change. Without an outlet for their stress, the Felacatian's body would shift its form within seconds, becoming a huge, predatory cat.

In this form, she is extremely dangerous and is protected by a row of heavy spikes along her back, along with claws that could shred durasteel, notoriously potent strength and speed, and incredible sensory perception.

- With practice, she can eventually phase back and forth in between the two forms at will, and, with further practice, restrain herself from shifting when she doesn't want to, but for now, she is unable to do so.

​
Mirax has spent the bulk of her life as a salvager. She worked up and down the Rimma doing various odd jobs, even a few for Arceneau Trade Company.

She enjoys shinny objects, as evident by her joy of scavenging, and likes long runs down the beach. Mirax doesn't, however, enjoy staying on a ship for too long. It makes her get antsy.