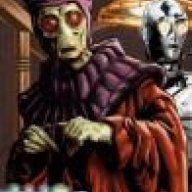 Character Bio
"Minister Haaku will see you now." Said a silver bodied protocol droid. With a hurumph the armored Neimoidian who had been waiting in an anteroom rose to his feet. It was about time. Rorik Dodd was an enigma amongst Neimoidians. While most of his people abhored violence and conflict, Rorik and his comrades in the Neimoidian Gunnery Batallions made a living off of it. This was not necessarily by choice, as grubs they had exhibited aggressive tendencies and hese were encouraged through psychological and chemical conditioning.

Rahn glanced up from his correspondences as TC-14 ushered his appointment into his private office. Orange eyes looked over the approaching Neimoidian with curiosity. Rorik Dodd had requested a meeting offering loyalty and reliability in exchange for an in-road in government security contracts. Rahn sensed an opportunity and had been of late, wishing he had more pieces to field in the great game. He had considered that a PMC who owed him favors would be ideal for missions requiring plausible deniability or less than legal actions.

Rahn put down his pen motioned that Rorik sit. "Please be seated Commandant. I would not have taken this meeting if I were not interested in your proposal, however my time is valuable so I must ask that we speak truthfully."

Seating himself, Rorik replied, "That's a bit hard for us, you know." TC-14 approached Rorik balancing a tray of beverages to which Rorik availed himself.

Watching the neimoidian consume his drink, Rahn smiled slyly and continued. "Indeed, which is why you've just drank a powerful truth serum and sedative."

Rorik's eyes grew wide and his skin flushed with anger. He attempted to rise but the muscle relaxants were already kicking in. He struggled to rise and almost toppled forward if not for TC-14's steady arms.

"I apologize for this, however we both know that during your conditioning you were made to be loyal."

"Fat chance of you earning mine now sleemo" Bit back Rorik.

"Like I said, this was necessary. Now tell me. Who are you loyal too? Who sent you here?"

"I am loyal to Neimoidia." Rorik said as he was compelled to answer. "I came on my own free will, not expecting this betrayal."

"They really do make you different if you've no fear of betrayal. Now tell me, did the Trade Federation send you here?"

"No. I came to bribe you in exchange for favorable contracts for my company."

Rahn sat back in his seat and sighed. The truth serum was one of the best, or so he'd been told, perhaps this was as cut and dry as it had appeared. If that was the case, Rahn felt more relaxed. They could move forward. "Rorik thank you for indulging me this interrogation. The serum should wear off soon. However if you have any lingering resentment or thoughts of revenge, reveal them now. You will be investigated and scrutinized if you wish to enjoy lucrative government security contracts. I can make the way easier, the jobs more frequent, if you can understand that this interrogation had to happen and can move past it to a working partnership."

Rahn did not know what was going on behind the eyes of the Neimoidian mercenary as his brain attempted to fend off the chemicals that compelled him to speak honestly. That is to say, until Rorik spoke, "I can move past it."

"Excellent." Said Rahn with a smile, he produced a stylus and a holopad. "Now let us talk about what we can do for one another..."

For Her Majesty's Consideration:

[member="Lady Kay"], Your Highness, I humbly write to you today with a petition to grant my office authority to hire privateers, post bounties, and offer contracts to well vetted, CSA PMCs. This is only a request to provide the opportunity for your Ministry fo Foreign Affairs to add more tools to its repertoire, and when necessary field more pieces on the board. The option to utilize assets that can operate across the border while we claim plausible deniability could be invaluable moving forward. I fully understand that this would carry its own risk, chief among them is the revelation that your ministry of foreign affairs could be conducting aggressive actions. However I argue that these powers would never be directed towards our friends, but only belligerent powers or individuals that have become commonly accepted as threats to our State. I will of course, submit all bounty or security contract proposals to your office for review if this assuages any fears. Rest assured I will not be hurt if you contend that this proposal would be detrimental to your Ministry fo Foreign Affairs.

Your Humble Servant, Rahn Haaku, Minister of Foreign Affairs
You must log in or register to reply here.

The Office of Judicial Affairs