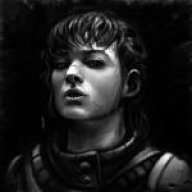 Mina's most apparent strength is probably her aptitude with a lightsaber. Both naturally gifted and always willing to put the work in to improve, she is surprisingly skilled with her favored form, Djem So- for a Padawan, that is. Advanced Placement lightsaber classes, sparring with her previous Master, and skirmishes with pirates, slavers, and other criminals have honed her abilities even further.

Her resolve could be classified as both a strength and a weakness; while she remains unflinching in the face of fear, she could also be classified as an impatient hot-head who draws her saber first and asks questions later. While genuinely good natured, she often gets carried away by her passions, for better or worse.

The death of her previous Master has left her emotionally scarred and more withdrawn than before; while she refuses to discuss the issue, it is clear losing him has affected her deeply. As of yet she remains uncertain how to move forward and deal with the grief inside her, and so she suppresses it and hopes it will fade on its own.

APPEARANCE:
On the tall side for her gender, Mina possesses an athletic, leaning toward muscular physique gleaned from years of constant training and fighting. Her blue eyes and petite features are often twisted into a determined scowl, her long blonde hair either pulled back sloppily or sporting a number of fly-aways; she wears no make up and rarely spares herself even a cursory glance in a mirror, being far more concerned with returning to her training than tending to her appearance.

BIOGRAPHY:
Up until recently Mina has had a rather uneventful life. Raised as a Jedi by the SJO, she has always struggled to control both her temper and her eagerness and enthusiasm in all things. She was loud, boisterous, and opinionated- all the things a Jedi should not be, it always seemed. Thriving on the training she received with a lightsaber, Mina poured herself into her exercises, deciding that if she couldn't be the best Jedi, she would at least be their best protector.

When she was thirteen she was made Padawan to a Jedi Consular of the Order. Their personalities were polar opposites, save that both loved to argue. This endeared them to one another immediately, and for the next five years they were inseparable. His death left a scar on Mina's heart- one that she's still trying to learn to live with.
You must log in or register to reply here.