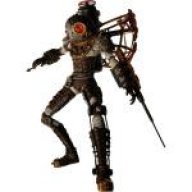 STRENGTHS AND WEAKNESSES (Required: 2 Weaknesses Minimum) :
+ She built up stamina and strength over the years of wearing the suit.
+ Experienced with melee attacks.
- Afraid of her looks, That is one of the reasons why she wears the suit.
- She gets bodyaches a lot.
-Burns on her torso

ITEMS: Her suit
BIOGRAPHY:
Melodie was born to a poor family. She was put up for adoption as her old parent had died when they were drunk, they tripped off of a building. She was adopted by a rich family. Her family taught her how to read, write, and more. She loved music and Painting. Though, one day, A tragedy happened. When she was painting, A fire broke out in the home. She was burned very badly and the doctors said she would not make it. Unless they replaced most of her limbs with robotic attachments. They did a surgery on her arms and legs, and some organs. She was fine, But her body was still burned on the stomach. She was embarrassed and she bought a suit to cover up herself. It was simple. A few years ago, She left her parents home and she bought a new suit. It was expensive but she could protect herself with it.
KILLS:
Post the names of the PC characters (characters role-played by real people) that your character has killed. If possible, include a link to the thread in which your character killed him/her.