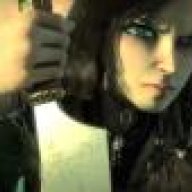 Kila Cadau didn't usually leave Manda'yaim, since diplomacy wasn't her thing and causing a galactic incident by insulting the wrong guy would be a really stupid reason to start a war. But, as it stood, the Mando woman was bored.

So she went hunting. Specifically, Vornskrs on Myrkr, because why not hunt something that could hunt through the Force? Granted, Kila wasn't Force sensitive, but it should still prove interesting.

For this outing, Kila had her sniper rifle for actually shooting the things, her vibroblade for stabbing any that got too close, and her pistols because since when did she go anywhere without them. She had hovered over bringing the besk'ad but in the end decided the lightsaber-resistant sword would only get in the way. No helmet. All the extra features took the challenge out of it.

So, here she was, a few meters into the forest, bright green eyes scanning the foliage for any sign of the elusive canine.

Character Bio
Myrkr, A planet that was covered in forests, mountains, and plains that would make the ones back at my home look like a sandbox. I had taken the public transport here. I wanted to find a place that was secluded and private. I wanted somewhere to make my home until I could find out the truth of this one, and make of what it was. Carrying nothing other than the clothes on my back and a Vibroblade. I walked from the space port with a green face. I was so close to hurling. The pilot of the weird ship thought it was funny how my face was a light shade of green the entire trip. I think he purposely went slower just to test my limits. But how close I was to take my dagger and stab him with it.

Ships were not a thing for me. Not even cars on my world were. Just about any transport caused me to feel sick. I walked over to a weird creature that looked like a human but was colored green with pointy ears that drooped down like twin tails on her head. I smiled at her, and asked for a map of the area. I looked down at the newly given map as though it were gold. However, the city I was in was fairly small. A store here, a gym here, a restaurant here, and a city hall. I looked further on the map to see a grove of trees. I nodded my thanks and headed towards the forest.

it seemed to take me hours to reach the place. I thought that it was small and easily hidden off to the side, but how I was wrong. It was large. Very large. I folded up the map and put it in my jeans back pocket as I took a step forwards into the dark woods. They trees looked eerie in the dim light. The entirety of the sun seemed to be blotted out about 30 meters in. Quietly I pulled out my dagger as I felt a shiver up my spine. only to hear a twig snap. my body went into overdrive.

Kila's head whipped around as something - or someone snapped a twig a few meters to her left, scaring off the vornskr that she was stalking. Growling in frustration, Kila prowled towards it, the barrel of her rifle lowered some in case it was somebody that it wouldn't be a good career move to shoot.

Verz, for instance. That would be awkward.

Character Bio
My senses were flaring up, and there was nothing to stop it. Everything seemed brighter, stronger, and very loud. Even my breathing sounded like a tornado was flying through the forest. My head started to hurt so bad. The headache that followed was like someone punched me in the head and continued to do so. I could hear everything. The animals in the trees talking to one another, the trees groaning as a gust of wind moved them.

I grabbed my head trying to calm myself down. I needed to do something. Something to let the senses power down. I could feel my hands shake as my adrenaline was kicking in as well. I could feel my breathing speed up, but yet there was a calmness in me. I let my hands fall down by my side and took my breaths slowly. Closing my eyes the world turned dark, and my ears seemed to go numb. Everything was building up for me to calm myself. Once I had control. It was say at first to allow my eyes to open. followed by my ears. I had not realized that my dagger was still in my hand when I could see someone coming towards me. Quickly looking around I took cover behind a tree.

My senses were still running at high speed, but now that I knew that the noise may have been done by a person rather than an animal, It only slightly calmed me.
@[member="Kila Cadau"]

Kila wasn't bothering with stealth. If it was an animal, it would be long gone. If it was a sentient, she wanted to know who the kark had karked up her hunt.
The snapped branch still caught her attention though, since it was right in front of her. It was too big to be snapped by an animal, but not too big that a humanoid couldn't have snapped it. She made a mental note of the fact as she crouched, rifle across her knees as she scanned the ground around her for any indication of where the "culprit" had gone.

Character Bio
I slowly looked out from behind the tree. A person standing in camo green armor held a rifle that looked as though it could shoot something from a good kilometer away. Slowly I made my way back into the cover of the tree. I took a few deep breaths as quietly as I could. The dagger in my hand vibrated slightly as my nerves were betraying me. Shaking so much that It was like jingle bells. Stopping my hand I looked around to see that the person was now kneeling looking at the stick, most likely as well looking for where I had gone. Realizing that my shoes would leave imprints. I took them off and held them.

I took one last breath before running to the next tree, Not making a sound that even I could hear with my heightened senses. It was like the dangerous version of cat and mouse. Only the Cat had a weapon and armor when the mouse had literally nothing.
@[member="Kila Cadau"]

Quietly snarling a few uncomplimentary words in Mando'a, Kila noticed the imprints of somebody's footwear. Probably hunting boots, since they were out in a forest with vornskrs, but you never really knew with the galaxy. Rising from her crouched position, she followed the shoeprints for a few paces before they changed to footprints. The footprints were much harder to detect, and she had to concentrate hard, not moving from one faint imprint to the next soft indentation until she had seen it. It was slow going - very slow going - but her new quarry couldn't exactly be sprinting either, or he would make much more noise.

Character Bio
I could hear the woman curse in some language that I don't know. I could hear all the hatred that she had for me, and I didn't even know why she was mad at me. I just knew that I couldn't trust her. Once again I could hear her move to where I once was As she moved and looked down I moved as well. Wasting no time as I made my way to the next tree and took cover behind it. My breathing raspy and hoarse at the anticipation of being shot. I just hoped that I could some how talk to her and say that I was not trying to do anything wrong.
@[member="Kila Cadau"]
You must log in or register to reply here.
Share:
Share
Menu
Log in
Register
Install the app
Top