May the Skraal Eat Your Eyes 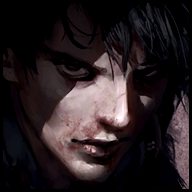 A pair of native Skraal stood at the foot of a figure, a figure slumped with its back against the wall. They sniffed, they poked and they prodded but were seemingly no closer to the answer. The large rodents weren't very well known for their intelligence. However, they were known as scavengers.

The smaller Skraal, the one with only one ear (no doubt lost in a brutal underworld battle with the Cthon) looked mildly perturbed. He did in fact agree, it didn't matter if it was dead or alive and it had been lying there for a long time now. If it was alive then surely it would have gotten up and left by now. There was one problem...

Non-organic eyes stared forth, crimson in nature and completely unblinking. It wasn't really looking at either Skraal, they just so happened to be standing in the way of the gaze. Again, not smart.

The one-eared Skraal didn't feel like his companion was being particularly negative or non-contributive to this discussion, they were a people above such irritating social nuances, it actually was one of the very few benefits to being a giant rodent. No passive-aggressions, no micro-aggressions, no macro-aggressions and no giga-aggressions. Some biting though.

A nod came from the two-eared Skraal in agreement of this fact. It was too big to move, sure they were pretty low down in the level scheme of Coruscant but they still had a way to go until they were truly at the bottom. Hauling this thing all the way down? That was work. It looked heavy.

Now that was a grand idea. They wasted no time. One Ear went for the creature's arm whereas Two Ears focused on a leg. Almost smart, removing the limbs would make it easier to transport, take off the parts that might get snagged on stuff.

“DIS NOT FLESH!” One Ear declared very suddenly, having just bitten into what was clearly a metal appendage before resuming his meal. Two Ear looked at him, observing his companion complain and then continue to attempt to eat what was blatantly shiny non-flesh.

The Skraal stopped for a moment and considered his answer, it seemed as if a truly thoughtful moment was occurring right there and then.

A small utterance came from the throat of the figure, a crackle that became a low guttural rattle. It's chest breathed evenly and deliberately despite the insistence of plagued teeth piercing the flesh of its leg. The inner-workings of the mechanical arm slowly being revealed by determined hunger.

Still it did not move.

The tone, disgusted and firm, was not entirely expected by the Skraal. Not here anyway. Oh sure, they were used to the disgusted part, but the relatively soft, female voice and the sort of bossy tone startled them a little. This wasn't the upper levels of Coruscant. Sure it wasn't the bottom most either, but usually this was a space where the Skraal scuttled uncontested.

Especially by humans not much taller than they were.

Irajah motioned with one hand as she approached. Petite in form, dressed neatly, with long dark hair braided up around the nape of her neck, it was clear that she did not belong here.

Which honestly made them even more uncomfortable. The Skraal weren't particularly bright and while she didn't cut a particularly menacing figure, anomalies in their environment were not usually taken well in stride. Unless it was clear they could eat it.

Which, in this case, seemed possible in truth.

Her heels takked against the broken duracrete. While she addressed the Skraal, her attention was on the figure propped up against the wall.

Character Bio
There was a pause, the voracious chewing ceased and both rodent heads lifted in unison to look towards that which would attempt to shoo them. Bent whiskers rattled and crusty noses twitched as they stared at the woman, sizing her up and seeing pretty plainly that she wasn't that big.

One Ear seemed offended, pointing a scabby claw towards the intruder before baring his front fangs at her and inadvertently showing off the wiring that was stuck between his teeth.

Two Ears was undecided, still staring, almost as if a creature of his mental capacity could analyse the situation. He could. Kind of. In their world, war was a game of numbers. One Cthon beats one Skraal but one Cthon gets eaten by many Skraal. This was not an underworld dwelling creature like them, no, an upworlder.

“To bigz fur yoo to takez!”

Could two Skraal beat one upworlder? Two Ears knew from experience that the people down here were often armed, with the exception of the children (who were often just delicious instead). Was it a child? Or just short. He couldn't really tell. They all looked them same to him. Funny bald things.

The figure's throat rattled once more.

“...we iz leavin,” the larger one finally responded with a soft hiss in his voice, it was begrudging but flight had defeated fight.

At least One Ear felt like there was some kind of moral victory in making what probably sounded like strange threats. Unsurprisingly their people didn't have a word for vongforming. Lumpy seemed close enough.

They began to trot away and a new discussion was born as they had to begin the scavenger's hunt once again.

“Smeg stoopid. We tellz Plod instead.”

It didn't take long for them to get over it.

The conversation, as thrilling (although fascinating to hear a Skraal say a word as complex as girth) as it was died into nothing as the pair vanished from sight and no doubt back into the comforts of sewage and relative obscurity.

Leaving just the figure and the woman. Had its crimson eyes moved or was it always looking up at her like that?

Character Bio
Irajah was mostly bemused as she watched the antics of the Skraal. They were not a species she had much direct contact with, but on the rare occasion she did, well- she was rarely disappointed.

With a chuckle and a shake of her head, she relaxed slightly. They had been no real threat to her and she knew it, but if she could avoid making a bigger scene in this neck of the woods it would be much preferable. Coruscant was not a strong hold of those who she would consider allies, and she had managed to fly under the radar for the last year and a half. She'd much rather keep it that way.

Crouching down, she studied the figure she had 'rescued'. In truth, she wasn't sure just what they'd been on about, but the commentary she'd overheard had piqued her interest. Irajah was, first, foremost and at heart, a doctor.

Of course, her focus had shifted over the last couple of years.

"Someone did a number on you my friend, and I don't mean the rats," she murmured, rocking back slightly on her heels.

Irajah Ven was not a good Samaritan. She might have been once, a long time ago, but events had lifted certain personal lies out of her eyes and she'd realized that even when she had been working to help others, it was by and large because of either the professional challenge or because it made her feel good to do so. Even when she had been 'good' to almost anyone looking in from the outside, she had been selfish. Once she had realized that, well, it had made a great many things easier.

"Are you awake in there? Can you speak?"

A voice sounded behind her.

Desmond, once a member of the Star Cabal, now a loyal retainer, hovered.

"Mmm, yes. I believe so." She didn't take her eyes off of the figure slumped against the wall.

With the Force, Irajah could have handled the body easily. But it would look less strange if Desmond handled it.

Character Bio
Those same eyes followed the woman down as she crouched before the figure. They moved in a manner that was too precise to be human and still yet hadn't blinked. No expression came accompanied, eyebrows neutral, no creases upon the brow, cheeks hollow but resting. The upper-lip sat upon a large monstrosity of a black metal jaw, it did not have hinges and seemed to have no way to open or close.

Chest still flowed in a perfect rhythm without any falter or irregularity, unusual given that it's shin had just been upon the receiving end of vicious mastication. Beneath that still, a heartbeat of clockwork, neither elevation nor depression in tempo.

The voice modulator located upon the throat rattled once more, this time slightly louder and perhaps directed at the woman who inspected her.

Half-mechanic, half-organic. What was real and what replaced? Why was another question, but only if you really cared enough. Do you? It seemed malnourished and dehydrated, suggesting it was very likely that some organs were still organic, if not suffering. Arms were clearly large, brutality-born cybernetics created with destruction as a purpose. The deep crimson welling and dribbling down the side of its leg was the clue of flesh.

What of the brain? Why did the figure not react to anything? Most likely scenario would have been a system failure, owing to another robotic organ. Damaged, perhaps. Faulty, maybe. It was not uncommon for a droid to shut down in such a manner, with some parts still functioning and others completely silent.

Not a human brain certainly. Organic beings don't just sit down and wait to...

"You wish to or you are telling me to? Well, no matter. We'll sort it out once we're somewhere less..... well frankly less gross. If it's the former, well, we'll have to see if you still feel that way when you are all fixed up. If it's the later." Irajah chuckled. "Too late. Desmond?"

She stepped back as the larger man stepped in, scooping up the figure.

"Heavier than she looks."

With a small frown, Irajah tilted her head.

Whether it was about her weight or the fact that 'it' was indeed a 'she' was unclear.

They would travel up a number of levels. The Agua District was by no stretch a 'good' part of town, but it was significantly better than the chithole they'd come from. The S.E.M.C. settled on a corner, right on the edge of this and the neighboring district. Of course, they weren't going to the medical center itself, but to Irajah labs above it. If all went well, she would set to stabilizing and fixing up the wretched they'd picked up.

Of course, there was no telling just what that would take until they got there.

[member="Sam Rodarch"]
You must log in or register to reply here.

The White's of Your Eyes
2

For Your Eyes Only