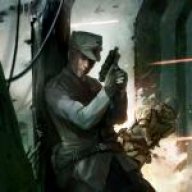 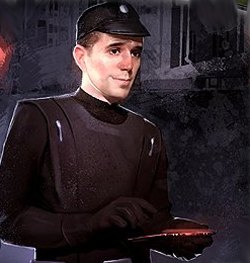 + While instilled with a variety of skills and training before his initiation as Ensign, Maric has found his primary strength is as a ship's gunner. He is able to successfully man and shoot nearly any ship-mounted weapon if called on, as well as possessing sufficient knowledge of their capabilities.

+ Loyal to the Imperium and eager to learn whatever he can, though this can become overbearing.

- Not able to wield a blaster pistol or rifle to the same degree as, say, a Naval trooper or storm-trooper. This usually forces him to either shift away from any firefights and boarding actions or to take cover until the fighting has stopped.

- Still inexperienced with leadership; he usually accepts orders and rarely delegates them (though this isn't helped by the fact that he's at the bottom of the rank ladder, anyway).

Despite being fairly youthful in his overall appearance, Maric possess a fairly fit build - a guaranteed requirement if the Ensign is to get through each day without collapsing in exhaustion. He keeps his uniform to a high standard and usually delegates part of down-time each day to maintaining it.

A freshly-inducted officer-recruit from Obascus City, Maric Aurelius followed within the foot-steps of his deceased father - who was also a serviceman within the Fel Imperium - and joined the Naval Legion once he came of age.

Pragmatic in thought and meticulous in observation, though 'raw' and lacking in combat experience, Marric goes about whatever assigned task he has with gusto, aiming to make himself stand out above his peers. He is eager to, over the course of his career, eventually earn the rank of Captain and the coveted privilege of commanding his own capital ship. On the other hand, this almost obsessive drive could have the potential to back-fire or set himself against his fellow crewmen - such an attitude has earned him a few scathing remarks during his training; 'over-ambitious' seemed to have popped up the most.

For now, he has to prove himself to his commanders, the Naval Legion and to himself that he is more then up to the mark ...

SHIP:
TBD once sufficient rank has been reached.
Current ship and post not yet known.

ROLE-PLAYS:
TBD
You must log in or register to reply here.