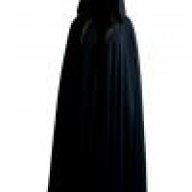 BIOGRAPHY:
Mardeth Holzman is a Herald of Pestilence from Endor. She was born and abandoned by her mother. The Plague Doctor found her near the village of the Heralds when coming for a daily visit. He brought her into his laboratory and decided to expand her mind, By making her smarter, And he made her older. After this complicated process, He explained basic things to her. She has hair, a rare occurrence for her species. She then left that room and decided to look around. After that, She went outside. But not after the Doctor gave her a cloak.