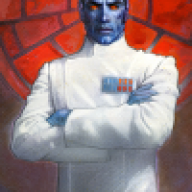 STRENGTHS AND WEAKNESSES (Required: 2 Weaknesses Minimum) :
Strengths:
+ Malus Bligh is a clever, intelligent man capable of coming up with strategies, tactics and plans that would be effective, given the situation.
+ Malus Bligh is a well respected peer, serving under the command of Sith Lord, Darth Vazela. Subsequently, he has sway and influence in matters when it comes to the Imperial navy.
+ Malus Bligh is an experienced veteran, having served in the Imperial navy for the majority of his life. This experiences gives him insight into the navy, as well as the Sith Empire, which he has served in for several decades.
+ Malus Bligh is a keen pilot and capable of flying a wide range of ships. He also has the ability to take command of ships ranging from Frigates all the

way up to a Star Destroyer.
Weaknesses:
- Malus Bligh is an old, aged man. He is considerably weak physically and has little to no vitality. He is extremely slow in moving.
- Malus Bligh has lost the ability to effectively use a blaster pistol, rifle or carbine. Because of
his age, he finds it hard to aim at a target without the aide of a device to aim for him, and doesn't have a steady hand when he holds one in his arm, due to his physical state.

SHIP:
Malus Bligh is the Sith Commander of the Attrition-class Star Destroyer, the Obscurity. He also has access and command of it's complements, including the Taral and Dominus-class Starfighters, Sigma-class Transports, Galaxy-class Bombers and Pandorum-class Heavy Gunships.

BIOGRAPHY:
Born in 771 ABY on Almania, in it's capital city Stonia, Malus Bligh was a survivor of the Gulag Virus that ravaged the Almania system's native sentient life, signing up to become an Imperial pilot in the Sith Empire's naval base at Ziost.

Serving as a pilot for twenty one years, he was severely injured during a training exercise with a squad of cadets that were in training to become pilots themselves. Although healed, the accident pushed him in a new direction of his career, becoming a part of the crew of the Pellaeon II-class Star Destroyer, Exitium. Here, he rose to bridge officer, participating in several conflicts for the Empire. Later, he would be promoted to Commander of the Exitium during a conflict in the Thule system, fighting off pirates which in turn ended with the Exitium's commander dying. After five years of service on board the Exitium, serving as it's Commander, he was recruited to join the crew of a new type of Star Destroyer.

Developed in the Kalinda system during his four decade self imposed exile, Vilox Pazela, also known as Darth Vazela, returned to Imperial space and headed to the Dac system, to begin construction of the Attrition-class Star Destroyer, the Obscurity. After becoming it's Sith Commander, Malus entered the service of his new master and participated in several conflicts, including the Dominions of Aeten II and Bastion, as well as the defense of Metalorn from Republic invasion.

ROLE-PLAYS:
The Imperium Will Stay Dead - Commander of the Obscurity, Malus leads the forces of Sith Lord, Darth Vazela, in securing key regions and sectors of Bastion as the Empire invades.
You must log in or register to reply here.
Share:
Share
Menu
Log in
Register
Install the app
Top