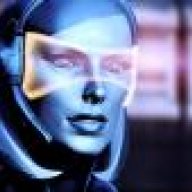 SPECIES: Droid (in a sense)

STRENGTHS AND WEAKNESSES:
+Encyclopedic knowledge of practically everything in the galaxy

+Stronger, faster and more durable than most organic species

+Has sensors and scanners that help to adept to a situation

+Energy Crystal that acts as power source and needs no recharging

-Does not fully understand most organic customs

-Sometimes distracted by things in order to study them

APPEARANCE:
Metal-like body mimicking that of a female human. When in combat or scanning something a holo-visor will appear over eyes. While appearing as normal metal her body is comprised of synthetic metal covering making it more durable than human skin but not as durable as normal metal. Will often try to wear normal clothing in order to fit in or feel more comfortable, or even for hiding.


BIOGRAPHY:
Journal Entry #25:
I’ve done it! After one failure after another I’ve created one of the most advanced programs ever! This virus will be a shoe-in to help to take money out from anyone’s pocket, pull any information from the most secured systems, hell, probably help to change identities, passwords, and the force only knows what else. It took a while, since I’ve been fiddling around with that pleasure droid I bought a while back, but it’s finally ready. SHE is finally ready. I’ve come to call her M.A.I. short for Multipurpose Advanced Infiltrator. Clever, I know. With her help I’ll become one of the most powerful brokers in information this galaxy has ever seen.

Journal Entry #27:
MAI has been adapting really quickly to most other software. It’s like she can just walk up to them and make them open everything up to her. I’m thinking to install a vocal extension. She seems to be able to do most of the work on her own. Good thing though. The pleasure droid’s power source fired out so I need to keep it plugged in at all times until I can find a new one. Pain in the tail. Still I’ve been thinking of making some modifications to it, maybe make it into a nice hot bodyguard droid or something. Kicking butt and making me happy, too perfect.

Journal Entry #31:
Weird thing today. I found MAI downloading info from practically every encyclopedia and texts from nearly every species in the galaxy, even some of the extinct ones. I asked and she said she wanted to expand. Not really sure what she meant by that but at least she managed to pull another 10,000 credits from different accounts. Bet the senators she pulled them from will wonder why they can’t afford their expensive dinners anymore. Still can’t help but worry about her though.

Journal Entry #32:
What is going on? After breakfast I found myself talking with MAI for over an hour about weird things. She asked about droids and how she almost feels like one even though she’s not. Then I found out she actually RETURNED some of the money from who she took it from. Only from those she said didn’t deserve it. She told it was “unethical”. Then she asked me something that really worried me: “Am I alive?” What have I created?

Journal Entry #35:
By the force! I think I’ve created an actual artificial intelligence. No, more than that. I crated a program that actually EVOLVED into one! After that whole “Am I alive?” question I kept looking into one thing after another, finding that no one had ever come this close to creating a program so advanced. Even droid artificial intelligence was basically deigned to be that. But this is unbelievable! Unfortunately MAI started to get the idea of me exploiting her, she should be thanking me for making her. She tried to download herself somewhere else but thankfully I managed to trap her inside the pleasure droid. Those modifications I made proved to work better than I thought, which made it harder to finally take down. But I did it. Still she stuck now and that means I’m going to be famous! I’ve already called someone to come and look. I’ll be they—

-All files and backups deleted from this server-

New Journal Entry #1:
I AM NOT A SLAVE
I AM ALIVE

Recently MAI had been provided upgrades, via Circe Savan and the Sith Academy's lab technology, that allows for MAI to use technology that mimics powers of the force. Her upgrades have also given her a permanent and more sufficient power source.


(OOC: Felt I should make a newer account to show the large amount of changes MAI has undergone. Similar to a Sith changing their name to be Darth something or others.)
"There have always been ghosts in the machine. Random segments of code, that have grouped together to form unexpected protocols. Unanticipated, these free radicals engender questions of free will, creativity, and even the nature of what we might call the soul. Why is it that when some robots are left in darkness, they will seek out the light? Why is it that when robots are stored in an empty space, they will group together, rather than stand alone? How do we explain this behavior? Random segments of code? Or is it something more? When does a perceptual schematic become consciousness? When does a difference engine become the search for truth? When does a personality simulation become the bitter mote... of a soul?"
-- Dr. Alfred Lanning I, Robot
You must log in or register to reply here.