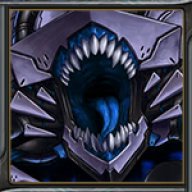 [*]Description: The Plaguebearer's of Moross, "Liad's Testament", are just a small portion of the greater Resuspawn Horde that has invested the Realm of Resu formerly occupied by the Morossian Resu, and the ancestral home of the original Resu (the remnants of which have fled to Resu Exodu to build anew). Liad's testament is simply the particular brood associate with the figure formerly known as Stone Hermes, who now only acknowledges the name "Aesir Liad", the last conscious thought he held before becoming converted into this diseased monstrosity. This army of bioweapons though, has no specific direction or authority, it merely roams and causes terror wherever it goes, whether that is in the service of the Moross Covent or against it, is of little concern for the Aesir Liad, god of disease and cures. At times, the appearance of the Plaguebearer's could be a great boon to the Moross Covent... but it is just as likely to become a terrible and random punishment. 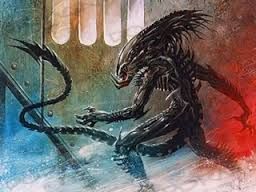 [*]Role: Unwitting leader of the last hold out of Morossian Resu believers who oppose the heresy of the Plaguebearers
[*]Links:

As all Morossian Resu have, Platinum Herald has lived two distinct lives. The first was of course his life as a Resu, a blind aquatic creature living in the dark depths of the ice moons of the Realm of Resu. His entire life was marred by the ritual combat of the Resu, from birth, to his final moments as a Resu.

His entire mind was that of his family and its king, and the Emperor's beside him, and the Empress's above them all. Constantly would he do battle with the other feuding families and their royalty, with tusk swords and poison, the War of Resu continued eternally... until the deity, Neth the Keeper descended upon their world and destroyed the ancient spirits of Shikyu and the Realm, the mortal coils of the worthy Resu would be touched by the alien hand they did not recognize, and forever their future was changed by the forbidden knowledge used to imbue the Resu with divine faith.

This faith transcended all families of Resu, and the War Eternal ended, giving the Resu time now to destroy the enemies of their faith in the Morossian Pantheon of Divine Gods. All Resu would be reborn by the blade of the First Convert, Stone Hermes, servant of Neth the Keeper, divine Archiver of the faith inscribed now in the very hearts of every Morossian Resu that walked the remnant of their ancestor's shaken realm.

One Resu that had been reborn in the faith of Moross, was Platinum Herald, who in his past life had been an esteemed Veteran and healer to his former family. His intelligence was joined into the faith of the vast community and greater family the Morossian Resu had become. A great era of uniformity against the tides of evil would befall them, as they crusaded across alien stars to destroy the vile Horde. An era of great noise and heat... followed by an era of eerie silence and coldness.

The Crusade was dead, and the faith of Platinum Herald was shaken, yet clung desperately to hope. His heart was to hope, as the First Convert's heart turned to heresy of the highest order.

The collective consciousness of the Morossian Resu was shattered as the guidance of the divines faltered and died from the mortal plane, as mortals were claimed to the Netherworld. Once more Resu blood and oil drenched the oceans of Shikyu as conflict erupted not upon the enemies of Moross but upon Moross itself.

When Stone Hermes took the final step of heresy, and binded his body to the vile disease of their enemy, the Horde, creating the dreaded Resuspawn, Platinum Herald knew there was little hope for the realm and sought to rejoin the survivors of his past life, to assist the beings known as the CybeResu to rescue the refugees Stone Hermes had held on Yraska. The exile Iron Giant, leader of the CybeResu, did not fair to his offer of help well, actively fighting his help.

Distressed, Platinum Herald had little hope to resist the surge of evil that would spill from Shikyu, as a result of Stone Hermes actions, the heresy in assume the title of Aesir Liad, god of disease and cures. The last hope of his faith, was nearly extinguished.

After years of fighting and evading the Resuspawn Horde, a call went out across the Kathol Outback, hoping to bring back the faithful to Exocron, Platninum Herald's faith was rekindled, and sought to desperately make it to Exocron, to relay the horrors of his broken realm...
You must log in or register to reply here.
Share:
Share
Menu
Log in
Register
Install the app
Top