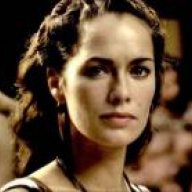 STRENGTHS AND WEAKNESSES (Required: 2 Weaknesses Minimum) :
+ Beauty - she is more attractive than the typical Human standard for beauty.
+ Noblewoman - as a Duch'a she has considerable worth to pull from; however, due to living in Terephon, she is ridiculously out of date with galactic happenings.

- Terephon - the planet she oversees is deep within the Transitory Mists Mists, preventing any long range communications to pass through. The current happenings, the Gulag Plague, Clockwork Rebellion.... anything of significance has not been heard of in centuries.
- Horrible night vision; blind as a Koros Bat and can't even use sonar to find her shoe!

"Never let a man become so deluded as to believe that he is the intellectual equal of a woman. It only leads him to evil."
―Hapan saying

Milady Devereaux is the Duch'a of Terephon, a planet in the Hapes Cluster, located in the Transitory Mists. The Mists, which blocked all long-range and holocomm transmissions, ensured Terephon's isolation and helped shape its reputation as a backwater in the Consortium. Nevertheless, rising from the marshy plains of the planet were Hapan cities and mountain ranges; the world became popular for hunting, and wealthy nobles often built retreats on Terephon.

The planet offered little to the Hapes Cluster other than several of the amazon guards who protected the Hapan Royal Family.

Most recently, she has traveled from the Rim Worlds to get a bit more in touch with the rest of Hapan Society, only to be surprised that there is a Republic influence to deal with...