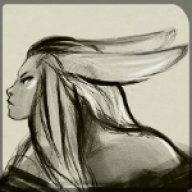 + The Tank - Out of the three Lepi bounty hunting group, Kurshi was the tank. She could take hits and is adept at using high tech to take down their targets.
+ So fees? - Kurshi was the credit cruncher, the slicer techie. She was the one who made sure they got the best deal out of a contract.
+ Excellent hearing
+ Agile and fast - Very strong legs!

- Single minded - It was all about the credits. She would not bulge if she didn't feel she was getting her due. She also never strayed from a contract; never would take a bribe, regardless of who or what the contract was for.
- Apathetic - Pleading for mercy never got you anywhere with Kurshi. You are just number; or more specifically, a number of credits dead or alive. Easier dead since it was easier to transport


BIOGRAPHY:
Kurshi and her "sisters" ( Evie and Nova; not blood related but close enough due to growing up in the same warren together) are part of a bounty hunting group for the better part of the last five years. They are extremely close; touchy feely and without a sense of shame whatsoever. Kurshi is the credit cruncher, the contract maker. Nova dealt with the heavy balistics and Evie... well... the smartest and brightest out of the three, was their medic... but she also was as ditzy as they came. The term kark like a Lepi held true to Evie, as she was more apt to use her seductive skills to gain information than Kurshi's more upfront no nonsense approach.

Afterall, that is how they managed to get hte deed of their ship. Evie seduced a man into handing it over.