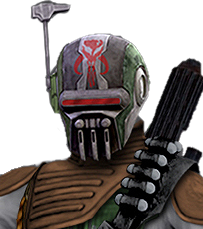 
Some legends are born from humble beginnings. Others were born from greatness. And others seem to creep from the ether, born from seeming nothingness. This was the case with bounty hunter known as Kaleb Djarin.

In the years following the Sith Empire's slaughter of the Mandalorians, a young bounty hunter came into the fray using the name "Djarin". To most Mandalorian historians, Clan Djarin was a minor clan that was first recorded after the Battle of Endor. Yet, the name Kaleb Djarin could not be found in any records that survived the conquest of Mandalore.

Regardless, the young hunter had become an agent of the Guild. While youthful compared to most of the other bounty hunters on the playing field, he is showing promise. He shows neutrality to most causes, flags, and politics. In the end, as he sees it, factions and allegiances are mutable; the need for hunters is forever.

Thus, do you need someone killed? Do you need a bounty rounded up? Are you someone who needs a job done "off the books"? Kaleb Djarin is your man on the ground....for the right price.
​

TRAITS:
[+] Talks the Talk: Kaleb appears to be well versed in a few languages. He has been reported to speak, outside of Basic, fluent Mando'a and Huttese.
[+] Walks the Walk: Kaleb shows significant martial skills. He has deadly ownership of blaster-sharpshooter. He fights with a mix of Mandalorian hand-to-hand and the zama-shiwo arts of Jedha.
[~] The Code: For the most part, Kaleb follows a code of honor. Specifically, he draws mostly from Bounty Hunter's Creed. In addition, he does not take any bounties or jobs if the targets are their species' equivalent of being pre-teens. This can both be beneficial when working with clients, or work against him taking a bounty.
[-]No Loyalty: Outside of the Guild itself, Kaleb shows no real political loyalty to any of the factions that carve up the galaxy. Additionally, aside from choice allies he's made, he seems to only look out for himself and anyone immediately working with him on a job.

EQUIPMENT:
-A set of armor, cobbled with a beskar cuirass and the rest of it durasteel
-A pair of LL-30 blaster pistols
-An EE-3 blaster carbine
-A set of Mandalorian vambraces