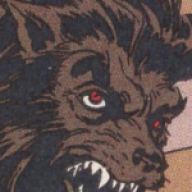 Make: Incom
Model: M-51 Cloudrunner Medium Freighter
Weapons:
Engines:
The Lucky Shot is an old Incom Freighter, though, like all smuggler ships, is cared for like a son. Kalaar won this ship in a game of sabaac with a few small-time members of the Black Sun. It's painted a dull grey, with bright red accents[much like the patterns on the image]. The interior of the ship is unusually luxurious(with Incom standards, not very much) for such an old ship, containing a lot of polished lacquer wood panels, and a large lounge, with a fully stocked bar. He doesn't use this much.
--------------------------------------------------------------------------------------
BIOGRAPHY:
Kalaar was born on Uvena Prime, like many other Shistavanen, as the runt of his litter(hard to tell). His parents did not like this, and abandoned him the first chance they got on a small asteroid station in the Outer Rim. He grew up on the station, under the radar. Kalaar eventually joined the local crime ring there, a choice that would sculpt his life ahead of him. Kalaar eventually rose through the ranks of the crime ring, becoming rather well known in the sector for being "the kid that could get you ANYTHING." His reputation as a smuggler led the station to be raided by Hutt Cartel mercenaries, who were out to kill the young Shistavanen. He escaped, with the help of his friends(who died fighting). He was put on a passenger ship, and taken out of the sector.


BOUNTIES COLLECTED:
None yet...

Character Bio
If you ship is not cannon then you will have to make a tech submission for it.

Alright, I'll get on it. Hard to find canon ship models in Star Wars that aren't either Jedi ships, starfighters, or the Millennium Falcon.

Character Bio
Nah its not that hard. http://starwars.wikia.com/wiki/Starship Here you can look for a cannon ship that you can use.

or you can look in the Approved Tech for the Republic and pick one from there.

You don't look so tough.