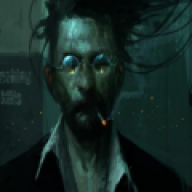 * Lack of Morals - Child or elder, woman or man, wounded or healthy, hero or villain, he cares not. If there is something someone wants out of a person, nothing can stop Taft from extracting it from them, and receiving his own satisfaction from the act.

* Lack of Combat Experience - While he received basic training in using ranged weaponry and CQC while under the employment of the PMC, he was never sent in on any field missions that involved actual combat and was resigned to a Collector/Interrogator role.

* Cadaverous Appearance - Taft never believed that the best method to intimidate a man was to either be stronger or bigger than him, quite the opposite. He found that the more one looks like a corpse freshly out of it's grave, and the more one acted the part of Death, the more willing others will be to talk under pressure. This does little good for him in social situations however.

* Insanity - His passion for Death and Biology have made the man lose a few of his marbles during his lifetime. He is prone to excessive drinking, smoking, or overdosing, to name a few, and self-inflicted wounds in order to receive his pleasure and, in the process, has lost more neurons than he would like to admit. This has also made him more susceptible to the influence of others, as long as it satisfy his desires, and holds no concept of loyalty.


APPEARANCE: Tafts body is a mess, his body covered in scars from his feet up towards his neck, all but a few self-inflicted over time. His clothing is entirely chosen to cover this when he is out in public, the most common outfit being that of a black suit with a white shirt, along with black pants. His eyes are constantly bloodshot, dark circles and and bags under his eyes almost always present, using a pair of round glasses to cover them up. His black hair is short and unkempt, the same being said for his beard.

He holds a white handkerchief in the top pocket of his jacket, a pack of cigarettes and a lighter in the back pocket of his pants, and a switchblade in the other. A blaster pistol is holstered near his left armpit, the weapon and the straps itself hidden behind his jacket.


BIOGRAPHY: Taft was born into a middle class family, on the planet of Coruscant in the inner rim, and for as long as anyone could remember, he was always a solitary person that enjoyed his privacy. A loner through most of his childhood, the sadistic tendencies he developed as a child, unable to know right from wrong, never disappeared but instead amplified themselves through the years. He was in bliss whenever he destroyed or hurt something, the constant punishment he received as a child only awakening his masochistic tendencies and increasing his desire to do wrong. He constantly picked fights through his childhood and early adult life, enjoying the thrill and spoils of either victory or defeat, whichever came being unimportant to him.

He either got expelled or quit whatever educational institute he would find himself at the time, either due to his personality or his inability to keep up with the institutes curriculum with a few notable exceptions, those being the biology and psychology of humans and aliens alike. Eager to put his knowledge to the test, at the age of seventeen, he knocked out a young man in the middle of the night and dragged his unconscious body to an abandoned building, forcibly awakening him with smelling salts and torturing the lad to the early hours of the morning, removing his vocal chords with rusted equipment and little medical experience as a parting gift.

What followed was a several years long investigation of which he was the prime suspect, in the end managing to escape the long arm of the Law due to a lack of sufficient evidence to point him as the man responsible and a lack of a main witness due to the death of his victim at the hands of shoddy workmanship. Disowned at the start of the trial by his family, he made due as best as he could during that time performing odd jobs, before settling in as an employee of a Private Military Company once he was let free. Here, he acted as an interrogator and torturer of prisoners and informants, managing to obtain the desired information most of the time for his employer, and killing the prisoner in question every time. Approximately two decades later, he found himself laid off on multiple accounts, the most prominent of which being the uncomfortable situation of the other employees.

ROLE-PLAYS: N/A
You must log in or register to reply here.