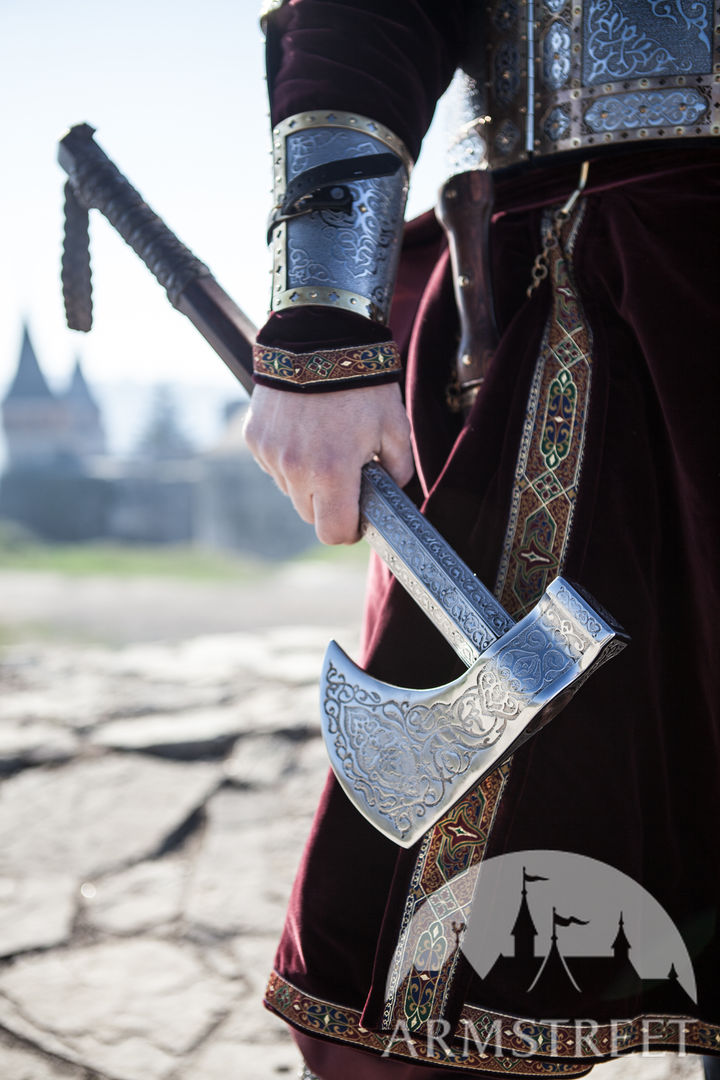 Entirely non-technological, these weapons manage to appear both ornate and primitive thanks to the material of their construction and are often underestimated by those who have yet to feel one's bite.

The main body of these axes are constructed of dense cedar wood made from the slow growing Veshok trees of Mandalore and treated with a blaster resistant varnish made from the resin of the Ori'ramikad tree. This shaft of wood is cut in a hexagon pattern for added strength. The forward half of this wooden shaft is plated in a Mandalorian Steel and continues the hexagonal pattern. The head of the axe is similarly constructed of Mandalorian Steel and carefully shaped to maximize cutting power while maintaining precise weapon balance.

The whole body of the axe is imbued with the Manda in the way of the Jal Shey, greatly enhancing its durability, the force of blows made with the blunt end of the axe, and the cutting power of blows made with the sharp end. While these axes would typically be quite lightweight thanks to the materials of their construction, a side effect of the mystic imbuement is that the overall weight of the axe is increased. However, the total weight of the weapon is still far lighter than a similarly constructed axe would be if made from Beskar.

In addition to these general imbuements made to the material of the weapon itself, runic engravings have been carved along every metal facing of the weapon. Based upon the principles of old Sith Runes, these Runes are written in the ancient Taung language and serve to call upon the Manda to produce specific effects. In the case of Gemcutter axes, this mystical effect manifests as the ability to sever a Jedi (or Sith) of their connection to the Force. Though it can take several repeated strikes to inflict the full desired effect, these blades will weaken a Jedi's connection with the Force with each landed blow (even when striking with the blunt end of the weapon) until they eventually loose their ability to manifest mystic abilities all together.

I'm not seeing a class system for armor beyond 'light, medium, and heavy' on our templates. Care to elaborate/specify?

Most of the older armors were designed on a 10 point scale. You guys... I guess are on a 7 point scale currently?

Which... Would probably have a bit of wiggle room anyway, if aiming for cloth or chainmail sections instead of the armor plate sections of someone's body armor.

Cairyn Midore said:
I'm not seeing a class system for armor beyond 'light, medium, and heavy' on our templates.
Click to expand...

I think you may be mistaking Weight for Resistances.

Character Bio
You seem to be going off of Template 4.0, which did indeed use such a number system. That being said, the factory is currently using Template 5.0 so if you could alter to adhere to the current template, that'd be swell.

All of your weakness require a some sort of force-nullifying to be in effect, with the first two being quite similar to each other in general. This is incredibly circumstantial and, considering one of the weapon's big selling points is affecting a victim's connection to the force, seems a bit much to be the only weaknesses in play. The weapon's a cool concept, it just seems to be a bit heavy-handed in the strengths section at the moment.

I dropped the numbered references and simplified those areas.


In regards to the Force Nullification effects... they aren't actually as powerful as they sound. This is because a defending player would have to choose to take a hit, and would then have to choose if or how severely they are wounded by the attack. The defending player would then have to decide if or how severely they are inconvenienced by the dampening effect. They then continue choosing if and when to receive damage, and choose if and when to allow themselves to be completely severed from using force based abilities.

Aaaaaand, all of these effects are then entirely optional post-battle. The defending player can choose to maintain the effects for a thread or two for their own entertainment as they roleplay coming to terms with their condition and/or receiving treatment to cure themselves of the effect. Or they can ignore it entirely and move on as if nothing had happened in their next roleplay.


Sooo, unless you plan on letting whoever wields one of these auto-hit with the force nullification effect, I'm not sure I'm seeing the balance issue. Like I mentioned above. This has to physically cut flesh (not just bounce off armor or shields or force barriers or whatever) in order to effect the defending character. And, while in a nullification field, the only strength worth mentioning is that it's well balanced and has a bunch of average-ish attributes.

Only thing I can even think of adding in there is that... it's an axe. So it's no good at thrusting attacks. (which I added into the sub)

Actually... I entirely overlooked the shields/force barrier limitation in the sub. It seemed so obvious a limitation, I didn't even think to include it.

Adding that in now.

Character Bio
[member="Mishka Larraq"] I completely understand the mentality regarding 'the other person decides if they take the hit and the severity'. Believe me, I get it. That doesn't mean it didn't look a bit on the ridiculous side if it's only weakened in a nullification field. Thanks for working with me on this.