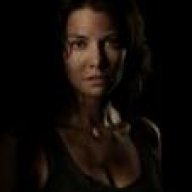 ​
Jax Denko​
[SIZE=10pt]"We cross our bridges when we come to them and burn them behind us, with nothing to show for our progress except a memory of the smell of smoke, and a presumption that once our eyes watered."[/SIZE]​
NAME: Jax Denko
FACTION: None
RANK: None
SPECIES: Human/Zeltron/Kraljica
AGE: 26
SEX: Female
HEIGHT: 5’8”
WEIGHT: 142 lbs
EYES: Green
HAIR: Brown
SKIN: Caucasian, pinkish hue
FORCE SENSITIVE: No

APPEARANCE:
Once upon a time Jax looked every inch the well-educated young scholar that she’d been trained to be, it’s been some time since she’s been able to even appear civilized. Her clothing has been patched in several places, and generally grimy. Earth tones are a must as they help her avoid detection. Her body has several scars, most notably a knife wound near her left shoulder, and another on the same side near her abdomen.

BIOGRAPHY:
Jax had a hard childhood on Nar Shadaa, with a drunken former Jedi for a father and a Zeltros dancer as a mother. Her twin brother Josiah, bore the brunt of their father’s attention since he was capable of using the force. She did her best to stay out of the way by helping her mother. When she deemed herself old enough to wander the streets by herself, the girl immediately found trouble. It wasn’t big trouble, and at the time she didn’t realize the potential danger, but she began to earn a few extra credits for school supplies by acting as a runner for smugglers and gang members. Her small size made her hard to catch if things got rough, and people were generally not eager to hard a neutral courier who only came up to their waists. Those who were interested could generally be dissuaded by the girl’s ability to generate electrical charges. At the very least the trick would distract them long enough for her to find someplace to hide.

Things only got worse when her mother was killed by a patron while Jax was still in her teens, her father was quick to follow as the consequences of his vengeance proved too much for him to handle. One of her younger siblings, Abel, disappeared shortly therafter. Along with Josiah, Jax worked to keep their family afloat in their parent’s absence. He managed to get a legal job bartending, while she took more dangerous courier assignments. It wasn’t uncommon for her to stumble in bleeding after being out of contact for a few days. After two years relief finally came in the form of their estranged grandparents. The wealthy couple took in the orphaned children. Josiah was sent to be trained as a Jedi, and Jax was finally able to afford higher education.

Having been fascinated by the various cultures that came together on her native planet the teenager decided to study anthropology, and eventually developed an interest in primitive cultures. The life of a student was much less rough than that of a street rat, but Jax couldn’t bring herself to miss the life she’d left behind. After earning her initial degree, Jax’s grandparents urged her to continue her education. During her first year of postsecondary studies, she enrolled in a field excursion to the planet of Pzob to study recently unearthed remains of an extinct Gammorr settlement.

Unfortunately while shortly after their arrival a Warlord from the Gamorr clans unleashed a plague of violence upon the planet. Their research site was an easy target for slavers, and Jax found herself fighting for her life for the first time since leaving Nar Shaddaa. She and one of the mercenaries the university had hired as security were the only ones to escape the initial assault. The Devaronian taught her as much as he could about combat, and surviving in the jungle environment before he was killed in an attempt to save members of the research team.

Jax survived on her own for several months, using her wits and growing skills to evade or kill the warlord’s men. One encounter ended with a cave in, and she was forced to wander the cave system for several days with limited supplies before finding her way out. If it were not for the high lung capacity she’d inherited from her parental grandmother, escape probably would have been impossible. Since then she has not been able to tolerate confining spaces.

Eventually she met up with members of the Dra’vadia militia and was given proper treatment and supplies. Jax’s did what she could to help the militia, mostly by raiding slaver camps for information and prisoners, but she preferred to be on her own. Gradually she began to notice something amiss, the warlord’s men were too well supplied and well organized to have sprung from a seemingly spontaneous uprising. They had to of been trained somewhere, which meant the warlord had foreign backing before he grabbed for power.

They needed to be stopped. Jax decided that she would be the one to stop them.


"No matter how dark the moment, love and hope are always possible."​

Character Bio
I like this character. I'm not sure how the Kraljica part blends into the story, but otherwise I like it a lot.

@[member="Josiah Denko"] covers the race thing in his profile, so I didn't feel that it needed to be rehashed.

@[member="Akio Kahoshi"]
You must log in or register to reply here.