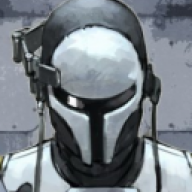 Strong connection to the Force-
Jason has an unusually high connection to the Force, letting him use relatively moderate levels of the Force. Such powers as pushing, pulling, and throwing with the Force come naturally to him. If he we're to be trained properly, he could learn other moves quicker. His senses are also naturally enhanced by the Force, letting him hear things a normal person couldn't.

Due to his unusually high connection with the Force, he could lose control of his abilities if he doesn't focus. If he loses focus, his powers would weaken substantially and he would have to rely his his lightsaber or thinking to get him out of a situation.

Jason's neutrality could be questioned. He does his best to stay in the grey area of the Force, but can on occasion submit to either the Light of Dark side, either going into a full fledged Dark Side power craze, or a light side guardian who protects the weak in the traditional Jedi way. If convinced by an outside force, through great convincing, he could be a Sith or Jedi, though it would take some work and time.

Jason is a averagely tall human being covered by a face mask and armor resembling a Mandalorian's armor, but this is not confirmed to be, or not be such. Over his armor, he wears a traditional light grey Jedi robe, with the hood almost always up. He keeps his lightsaber firmly attached to his waist. His face is almost always covered by his mask, hiding his features. When not seen in his armor or robes, he is seen dressing casually, usually seen in rather common clothing, but usually kept in grey tones.

BIOGRAPHY:
( Apologizes go to anyone reading this, i'm God awful with bios. )
Jason was born on the planet of Null, a planet bordering Jedi and Mandalorian space. He grew up on the planet till he discovered his force powers at the age of 6. By losing his temper, he sent several other children away from him in a sort of weak Force push, but was strong enough to injure a few children. Being scared of this, he went to his mother and was told he did what some experienced Jedi could do.

Fascinated by this, Jason begged his mother to find a Jedi that could teach him about the Force, but there we're no Jedi around his village or anywhere close at the time. So, Jason had to learn how to suppress his unusual Force abilities, this took years till he was able to do it, but by then he was wanting to USE the Force, not hold it back. At the age of 16, Jason left his mother and decided to explore the universe, hoping to find other Force users like him. This was a the beginning of his journey, since then he has learned more about the Force, and can even use a few abilities. He had also obtained a lightsaber from an old Jedi who saw the power of the Force in him. He replaced the green crystal that was already inside it with a silver one.

SHIP:
Jason does not own a space ship.

ROLE-PLAYS:
I have not roleplayed on a forum before, and this is the first Star Wars roleplay I have been a part of.