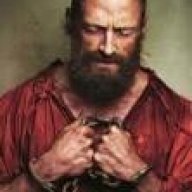 Very Strong for a Human: 15 years as a slave have left Jordan physically as strong as an average male wookie.

Determined: Jordan has spent 15 years
as a slave and clings to every hope and joy that he can find.

Fierce: years as a slave have made Jordan little better than an animal on many levels. This can be a serious problem in situations where social skills are involved.

Untrusting: It is very difficult for Jordan to love trust or have compassion for anything.

Appearance:
Jordan is 36 in years and strong as a wookie but the years have taken a toll on his skin. Deep lines on his brow and around his eyes reveal the worries and troubles of his melancholy mind. His grey eyes are still sharp and focused. His brown hair is short and thick. His face is covered in a thick curly beard that touches his chest. His arms and body are thickly muscled and he has more body hair than average.

BIOGRAPHY:
Jordan was born to a poor family of farmers on Dantooine. His Father was kind and honest but died when Jordan was 5. His mother was also a kind loving woman but joined her husband in death when Jordan was 7. His older sister raised him and his 8 other siblings then when he turned 12 he began working as a Laborer for any one who needed help. In the summers he worked in fields or with flocks and herds. In the winters he worked anywhere he could make enough to feed his brothers and sisters.

One year after seven years of labor no work could be found. He tried and tried but could get nothing to feed his family. He couldn't stand watching them starve and did the only thing he could think of he went hunting. Since there was little to choose from and chose from a farmers flock. He killed one old weak animal but was caught by the local authorities While carrying it home and since one old animal is worth more than one family of starving poor people Jordan went to prison. Jordan was sent to a mining colony on the fringe and cut off from his family. The family eventually starved to death and their home sold to pay for the burials. For 15 years Jordan has worked in mines and quarries paying for the animal he stole. 5 years for the animal and 10 years for trying to escape. 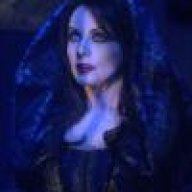 @[member="Salina Aviner"]
Je suis heureux d'être ici.
I like your profile as well.

Aw. thank you.
You must log in or register to reply here.