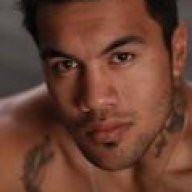 
APPEARANCE:
As all of Clan Awaud are now, he is dark skinned Mandalorian brown. Born and raised in the equatorial region of Mandalore he and his clan are all tan toned individuals. His strong jaw bone features and sharp jawline are traits of his family as well. Born with Hazel-Green Eyes, his gaze has a hypnotic feel while looking at him that keeps one engaged with his stare. A thick accent from his region of Mandalore, it also is very enticing to one to keep them listening. He trains every morning and keeps his body in shape as he get bored very easily so he keeps a muscular body in tradition of Mandalorian Culture.

BIOGRAPHY:
Last son of Balder Awaud, “The Wild Rider”, he was the last of Clan Awaud to be born on Mandalore. Compared to his older brothers, Jaster and Dargarious, he was not strong witted like them in leading large groups into battle. Yet, where his shortcoming were in leadership and strategy, he excelled in Blaster Handling and skilled as a Starfighter Pilot. His father trained him at a young age where he was also tutored by his older brothers, Jaster in History and Political Science, and Dargarious in Mathematics and Advanced Physics. With the well rounded education of his family, he was strong with a blaster and had a sharp mind. He was the youngest so he could never measure up to either of his brother, but was skilled in his own way.

After his oldest brothers exile where Jaster was forced to leave the planet of Mandalore, his studies in Political Science was never finished. As such he grew up with the personalities of his other brother, and became more of less traditional Mandalorian. Feeling as though he could never be in line for the title of Alor, Jake spend most of his free time traveling to females homes. Flirting and fighting. Drink and women were the name of his habits and he was a little weaker to those potholes in his personality.

During the ages where he grew up, his father and grandfather protected him from many of the larger events of the galaxy. Spending his time with his faults, Jake never realized the problems of the galaxy and when he finally was forced to join a branch of the clan, he was made a Marksman and Pilot. Yet again however, he spend all his time in bars and with other clans daughters. Something his older brother, Dargarious would no longer accept. At the age of 18, Jake was sent away to the family homestead on Vlemoth Port where he would rebuild and protect. It was at this time the Mandalorian Civil War erupted and in the next year his family would be destroyed. It was also at this time he found out that he was a Force User where he received a letter from a Branch Clansman stating his Grandfather, Father, and older Brother were all dead. He used the force in a fit of anger to flip a table and slam it into the wall. Realizing this new ability would force him to stand against the new regime, he went on a hunt to find his brother and offer him the Title of Alor.

Once all was done, and his brother Jaster was named Alor, he proceeded to follow the will of his brother and continued to be a marksman and Pilot for his clan.

ROLE-PLAYS:
None
You must log in or register to reply here.

Jaster of the Awaud Clan