It Had To be Tatooine

"Remember when I said I had this? That was a lie."

Character Bio
Gatz Duolingo despised sand almost as much as he despised being broke. It was itchy, rough, and lingered in his clothes and around his ship for days. And it was hot; it reflected the heat of Tatooine's twin suns until it was burning the soles of his feet through the bottoms of his boots. Why anyone thought living on Tatooine was a good idea, Gatz would never understand. The entire planet was literally just hot and humid death trap, with no redeeming qualities whatsoever.

Gatz wondered if the Galactic Empire was aware of that, or if they just didn't care and were trying to snatch up every system they could.

Considering the sheer amount of lawlessness in Mos Eisley, the smuggler guessed it was the latter. Either way, Gatz was going to take advantage of the organized crime on the planet, just like everyone else. He let a (very small) smile cross his face, as a group of laborers descended the boarding ramp of his YTA-1300 for the last time, hauling the final crate of spice he'd delivered. A Devaronian, representing the man who had payed him to deliver the illegal goods, handed over a credit chit. Gatz accepted it with a nod, and tucked the currency into his pocket. With their business concluded, the men departed the open hangar, acting as though they weren't carrying solicited drugs.

Gatz chuckled. Tatooine sucked, but damn was it easy to make money on the planet. 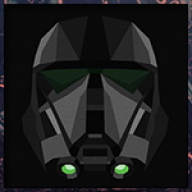 
The Deathtrooper moved through Mos Eisely, he was sent via Headquarters to give a patrol in such given town. Though he wanted to protest orders were orders- he was glad his suit came with a Miniature AC like device that would send a breeze throughout his suit whenever his bio-temp reached a higher level, it practically made patrolling fun! He held his E-11D out it was ready to fire at any moment- he knew about the criminals in Mos Eisely, and how to deal with them.

As he got near the spaceport he began to do his routine checks, checking lockers, searching people- he came up with a few drugs as it is- spices and such though he had let those people ago- he was looking for a big cache- didn't want to waste his time on civilians who sniffed the dust.

Elias began to take strides near the hanger section of the space-ports, he slowly began checking them seeing normal travelers and just units being deployed to the planet, he stopped at the last one taking his helmet off to reveal the glistening sweat on his forehead- he wiped it off putting his helmet back on which sealed with a plume of white vapor as he opened the door to the hanger.

Of course what he saw was normal just men exiting and a man near a YTA-1300, he looked at the men, analyzing them as he moved closer to the ship waving the owner of the ship over- presumably, he looked like the owner.