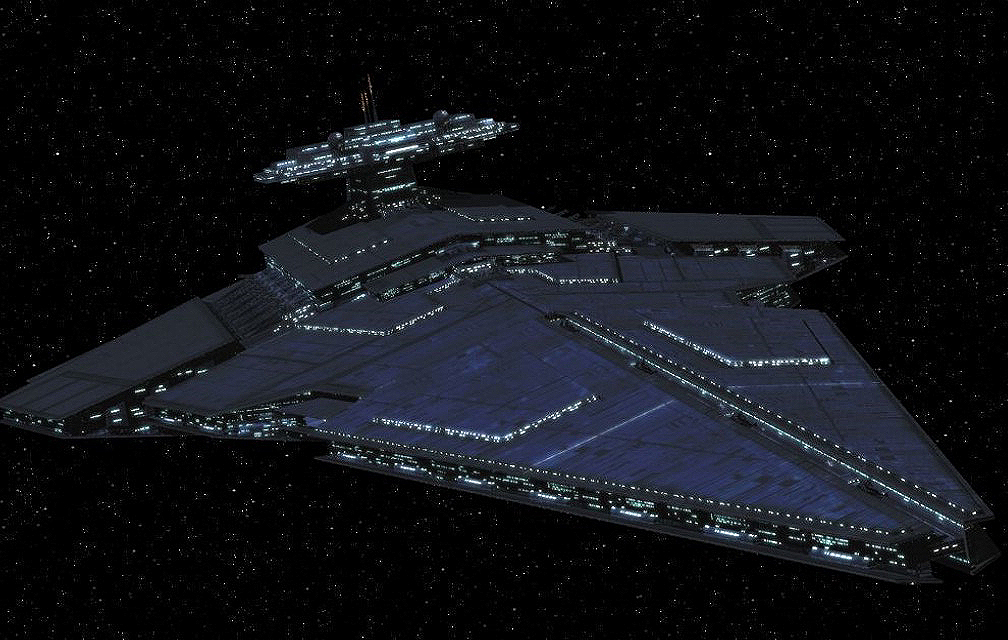 Source: This Guy. (This specific pic ain't there but I swear it's him, I did research and everything).

Description:
The Isard-II is a direct development of the Isard-I, a design of Val'ryss' failed Imperium. Though a solid design, it underperformed in several ways, including a relative failure to act as a proper command ship in spite of its size. Following the invasion of Atrisia by the Lords of the Fringe, the newly appointed Grand Admiral Cyrus Tregessar embarked on a project to revamp the Imperial Fleet. The Isard-I class was one of his first projects.

The engineers at Junbei Hao had significantly more advanced development techniques than Leviathan Industries, and were able to drastically improve the power distribution model and several other key aspects of the ship. The hangers were stripped and besides a single squadron on cranes, the ship had almost no internal capacity to carry troops or equipment. The requirement to carry a garrison of troops and forces to assault a planet was also dropped (though a portion of the crew consist of Naval Security Forces). The rest of the space was filled with Command and Control computers, workstations, and equipment necessary for the Isard-II to act as a dedicated Fleet Command Ship. Finally, advanced C4I (Command, Control, Communications, Computers, and Intelligence) facilities were added to make the Isard-II excel as a flagship.

The next step was overhauling the weapons loud out. The quad turbolaser batteries had proved to be energy hogs and in battle were barely more effective than a standard battery. They were cut, with some of the power being diverted to additional turbolaser batteries and the space going to a large group of Assault Concussion Missile Launchers. Several batteries of turbolasers were converted to a lighter model on smaller turrets, with less power but a much improved ability to track faster ships like frigates, corvettes, and large gunships (faster strike craft proved as elusive as ever). As power draw was becoming an issue, the Admiral next took inspiration from the Empire's enemies, and replaced half the point-defense quad lasers with flak guns.

As a new primary armament, the Empire began to examine various weapon systems they had in hopes of finding something that would be both an effective weapon and be able to make an impression as an example of the nascent Galactic Empire's growing might. It was during this search that the engineers at Junbei Hao stumbled upon the land-based Hypervelocity Guns.

The planet-based HVs-4 (little brother of the HVs-2) is essentially a super-sized and super-charged railgun designed to fire large bursts of projectiles (120 slugs a minute) at massive velocities and theoretically unlimited range (though aiming becomes increasingly difficult the further away the target is, and is effectively impossible once you leave a system). The slugs pass right through Ray Shielding and quickly overload the Particle Shields (not normally designed to deal with large numbers of high-energy projectiles) and subsequently batter down the armor and pulverize the hull and structure of a target spaceship. While enormously effective compared to a turbolaser, there are a number of drawbacks to the weapons. First, they have an absolutely massive power draw. This is generally manageable on planets, and HVs-4's are normally tapped in to the planets core so they don't compromise the grid. In addition they also generate large amounts of exhaust heat, which means they cannot fire longer than 10 seconds at a time, with around a 10 second delay between bursts (around 5 times as long a shot cycle than turbolasers). They are also notoriously difficult to aim. As the slugs travel at such a high velocity, even a very slight miscalculation on the firing solution can throw the shots dozens of kilometers off. Finally the Particle Shields that protect the emplacements have to be lowered and stay lowered while the weapon is firing, leaving it vulnerable to bombing runs. Though only a short window is open, this was exploited when the weapons were first deployed hundreds of years ago, and they never gained much prominence compared to the weaker-but-reliable planetary turbolaser.

Adapting the weapon for shipboard use was a tricky and time-consuming task. Because space and power on a starship is at a premium, the devastating capability of the planet-based systems could not be replicated in full unless a spinal mount system were utilized, which would have been as difficult to aim as the planet-based versions. Instead, the guns were shrunk and mounted on several huge triple turrets along the edges of the indent that runs on the centerline of the ship. While these enabled the guns to be aimed with a significant degree of ease over their predecessors (though it is still totally impractical to target anything below 1500m in size), sacrifices had to made as a result.

Significantly, the rate of fire had to be cut to half (60 slugs a minute) and resulted in no practical benefits as far as cooling and cycle time went (the limitation on length of a burst and delay between shots remains unchanged). The awesome power of the HVs-4, based primarily on the velocity of the round, also simply could not be matched with these smaller variants. The end result is a weapon that has significantly more power than a turbolaser or conventional mass driver cannon, but is far from being a total game-changer on the battlefield. The project was subsequently presented to the Admiral as a failure, who surprised the development team by praising their efforts and approving the guns for the main battery on the refitted Isard-II. Dubbed the SHVs-9 (Shipboard Hypervelocity Gun), the weapons were put into production.

Power draw proved to be a huge issue, and was dealt with in an innovative style. As the Particle Shields must be lowered to fire the weapon in any case, a system was built in so that the capacitors for that system are drained to help compensate for firing the weapon. This has a practical effect of causing a delay between when the particle shields are brought down to fire, and when they turn back on after shooting. Including the time when the guns are firing, this leaves roughly a 12-second window where the Isard-II has only point defense to protect against missiles, projectiles, and other non-energy weapons. The last two seconds of that, where the guns aren't firing but are still unprotected, is especially dangerous, as an extremely skilled pilot, dodging the large AA suite of the Isard-II, could race in and drop a warhead down the barrel, eliminating that turret at the very least and potentially causing catastrophic internal damage. With thoughts of the Death Star lingering in the back of his mind, Grand Admiral Cyrus Tregessar spent several days running numbers on probabilities of various scenarios, and eventually approved the weapon in spite of this weakness.

Despite the Admiral's attempts, the engineers were unable to increase the speed of the vessel, and it remains just as ponderous as any other Star Destroyer. Armor remains mostly the same through, except in a few spots were it was actually lightened to allow for the SHVs internal components, and a heavy belt around the turrets themselves and their magazines. The ship also proved even more expensive to make than its predecessor, and production was cut to minor to compensate. In a space battle though the ship is a true battleship, able to bring an incredible amount of guns to bear and dominating its competitors while coordinating the actions of an entire fleet. Anywhere else it's basically a liability.


(((Basically this caps everything under the 'heavy gun' ship. Which is uh, sort munchkin behavior but hey it's minor production. There are several aspects which don't vibe with the description, because I'm trying to bring it in-line with other ships. Most notably, the crew went up sharply. But a Star Destroyer with an 'optimal' crew of 11,000 just seemed absurd. Hypervelocity Guns currently stand as 1-to-10 for turbolasers. Could easily be adjusted. My goal with them is, well, sorta trite, I suppose. I just want a main battery that feels like a main battery. Like the 16-inch guns on the old Iowa-class Battleships, and pouring on more turbolasers just doesn't have the same punch. That said, I am not married to the idea of Hypervelocity Guns being that weapon, though at this point I would say we're pretty serious. But I am willing and able to heavily modify their capabilities or if necessary drop them entirely.)))

Character Bio
Alright. So this has a number of issues that are going to need to be addressed. First and foremost are these hypervelocity guns.

Simply put, they make the RPJs and FJs nervous as hell. They're primarily sourced from a video game, and were used in say game as a super weapon in space combat. Mass drivers are the closest comparison that sees wide-spread use on the board. Perhaps you could use some heavy mass driver batteries for the same effect.

Which leads me into my next point; the heavier the gun, the few of them there should be. Right now, your ship has a LOT of heavy guns, a lot of normal guns, and a handful of smaller guns. So you should have more turbolasers than heavy turbolasers, for example.

Also, your math is pretty far off. This ship right now has 1200 capital guns, up from the 900 max it can have. Remember; Batteries are worth four and the 'heavy' modifier is worth x2. So your heavy turbolaser batteries take up 600 of your guns.

Weapon numbers tweaked. Though I will note that the high proportion of heavy guns is intentional, as this is a capital ship designed to fight and kill other capital ships.

Pursuant to our discussion on skype, added a lot about the capabilities and limitations of the hypervelocity guns. Kept them at 1-for-10 at the moment.

Normally, I'd be very nit-picky with every detail of a ship. However, your description of the ship is excellent and detailed. You were quick to respond to needed changes. I feel like I can trust you and give this my stamp.

A little nervous about those guns, but we need a standard set eventually. Approved, with reservations.