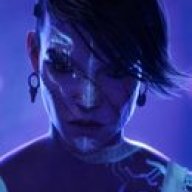 Luke wandered around the garden, his heart heavy with sadness. Though the garden itself was quite beautiful, but he wasn't really 'there' enough to notice or care. He had recently lost his family to a house fire, shortly after a boy named Xander had tried so desperately to save them. It was a valiant effort, but it was futile. His family was dead, and it was his fault. All of this dwelling on his mind was the sole reason for him being up so late. As a matter of fact, he hadn't slept a single minute since the incident, which was a few days prior. Bags lined under his eyes due to lack of sleep, but there was nothing he could do about it. The reason he'd come here anyway, however, was the word of Xander saying that people often came here to train. Walking over to a tree, he struck it with all of his anger, pain, and frustration. To his surprise, the bark splintered and the tree fell over, crackling and groaning. As he did so, he felt a surge of energy within him, unlike anything he had ever felt before. Staring at his fist in wonder, he tried it on another tree. Same result. What was happening to him?

(OOC: @[member="Xander Carrick"] you're welcome to join if you want)