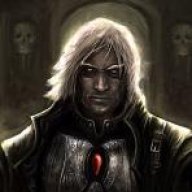 Walking through the streets of Coruscant, you could find any array of strange-looking sentients. However, one man got nothing but odd looks as he passed others. As if his towering height wasn't enough to make one stop and stare, his skin was pale and his long mangled hair a silvery white. His aura just reeked of discipline and authority, and he gave off the general image that if you pushed the wrong button, he would snap. Especially with the way he walked, broad shoulders back in a proud manner, like he could step into a building like he owned the place. But lastly were the eyes. To any Jedi, he would appear Sith just by looking into them. They glowed a golden yellowish-bronze, and all others shied away from his gaze. Was he a Sith? Of course not. He was born this way, a testament to the dark side. Under his gray trench coat and hooked to his belt, there hung a single lightsaber, a trophy of his first kill. It wasn't only for show however, as he was well versed in swordplay. With the tails of his trench coat swaying behind him, he took in his surroundings and wondered where to go next.

Character Bio
Courscant: 13:32
I shook my head as K was walking right next to me as we walked the streets of Courscant once more. Dressed in my Not so Jedi robes. I had a single visible blaster pistol on my right thigh, and a lightsaber hilt that was hidden in the vambraces that I wore on my arms. K kept bumping into people. Some would just move on, others would yell out to "watch where you're walkin" I could only shake my head as she tried not to hit people.

She was disguised as my mother. Dirty blonde hair, slightly taller yet slim figure with nice assets and a rack that would keep her afloat if she fell in water. Ether she was yelled at for running into people, or she was whistled at for her looks. Being a 16 year old, I knew about the "chitty chitty bang bang." But really it was not something that was on my mind. Nor would I do it with whoever K was acting as. It just felt weird.

Walking down the streets made me feel people around me. Good, bad, Grey, or right on the verge of falling to one side or the other. Really it was all about chance. I decided to walk alittle faster K began to slow down and so turning my head to her, "Mom hur- Uphf!" Smashing right into a man that was clearly taller than me. I looked up at him "I'm sorry, I didn't mean to run into you."

'What?' The sudden interruption of Dracen's inner thoughts had obviously disturbed him, but he decided to take a more refined approach to the situation, especially since it was just a boy and his mother. Turning around to look down at the child, his yellow gaze glared into that of the other's. "Perhapsss... You should watch your surroundings, child. This is Coruscant, and not all are as forgiving as I am." Staring him down, he waited for a response from the young boy.

Character Bio
Something told me that I should probably have stayed away from this man. He told me about how Courscant was not so forgiving as he was. I could only scoff. I had been in worse places than here. I looked up at the man's yellow eyes. Defiant and dauntless against the man. I had faced Two Sith knights and an apprentice. I shook my head at him. "Yeah whatever senior."

I then realized that I called him old, and then I just pushed him off with my words. Oh how I hated my big mouth.

Dracen's eyes narrowed at the remark, and grabbed the boy's shoulder, turning him back around to face him. This kid was asking for it, alright. "Senior, eh? Well perhaps we find out just how senior I am, hm?" Pulling back his coat, he reached in with his left hand and pulled out a white and black hilt, then dropped the hand to his side. "Now, I know you have one of these, am I right? Oh of course I am. The real question is, can you use that weapon of yours?" His tainted aura began to reach outward, the darkness of it all seeming to claw at the youngling's mind. He wanted him to know just what he had gotten himself into.

Character Bio
The man turned me around and K started to walk up to me to fight the man. I held my hand out as he challenged me. This man thought I could not fight with a blade. He was sorrily mistaken. I pulled my saber from my vambrace and smiled as he taunted me. "I can if you so ask, really I just wonder that you won't break a hip trying to swing at me."

Then before the man could attack me, I sent a force push at his chest. Being this close and already attacking right off the bat it might take him off guard. Even if he could excel with the force, I was one of the best of the Fel Cadets at the lightsaber. Hell, I was trained for the best.

"Umph!" Dracen let out a small sound from his throat as he was suddenly pushed back and slammed into a wall. After picking himself back up, he realized that he had dropped the lightsaber somewhere along the way. Calling it to his hand, he ignited the green blade and walked over to the boy. Raising the blade to his chest, he adapted a duel ready stance. Smirking, he then dropped the lightsaber and brought it out in front of him. "It's only customary to respect one's opponent. Didn't your mother teach you any manners?" And with that, he struck his lightsaber toward the boy's chest.

Character Bio
I smiled as the man flew back to hit a wall. I would be fighting alone in this one. K would never go against one of my orders. As he walked towards me, The green lightsaber ignited. Lighting up the street. before the lightsaber was taken out, there was a small crowd around us. Now everyone was running. I smiled as his pointed his saber at my chest. Ready for him to attack me.

As he suddenly lashed forwards, my senses kicked in. Twinging at my chest and mind to move. Sidestepping back and to the right I evaded the green saber. Not even activating my own, yet it was in my hand ready to be used in a moment's notice. "Is that all my opponent can do?" Even though he spoke of my mother, I could really care less. I hardly knew her.

Dracen arched an eyebrow at the boy, turning off his lightsaber and putting it away. Crossing his arms, he pondered the situation for a brief moment. It seemed that his long hours of training to be a deadly warrior on his home planet was nothing without a little push, as the boy had just demonstrated to him. "Very well, boy. Let's see if we can't test your physical attributes." Bringing his weapon back out, he augmented his speed with the force and dealt a quick series of blows to his legs, then slashed upward toward his face.

Character Bio
The man thought that he would test my physical attributes. I only smiled when I could see the man's body bend over as he was going to rush at me. My saber ignited as I augmented my own speed to rival his. By kneeling I brought my saber down to block the attacks at my legs while the upper cut slid past my face burning the slightly longer strands of my hair as it came so close to my face. I then started my attack run.

Wasting no time My leg lashed out to trip him up. and my saber came up to cleave him in two. "Try me old man."

Chuckling at the comment, the epicanthix brought up his lightsaber to bring them into a horizontal saber lock. "Again with the old man routine. I'm only in my twenties, boy. What are you? Fifteen? Sixteen?" With his strength, he was able to hold his own saber against the boy's easily with one hand. Taking one off of his weapon, he brought it down to aim a backhand smack to his face. Preparing himself against another possible force push, he smiled. it was either take the pain of getting smacked backwards, or that of a lightsaber slicing through his shoulder.

Character Bio
The man pushed against my saber with one hand. He was stronger than I was physically. And as I was going to answer the man back, he slapped me. I was hit back a second. and thats when my anger flared. "I'm sixteen, and now I'm gonna mop up the floor with your ass." My body became a blur as I rushe the man. Using the reverse Shien grip, I came across the man's chest. then back across using the force I pushed at the man's hand with the saber, intending to make him lose his weapon. My saber then came in to uppercut him once more.

A toothy grin flashed back at Xander as he began his attack. Moving back a few steps, Dracen entered his better known Diem So stance and parried a good majority of the strikes. One landed, and slashed ya way across his right forearm, leaving a small burn. Backing up a few more steps, he reached out with his free hand, ripped a sign from the ground, and threw it at him. While he did so, he checked the back of his hand where he had slapped the boy. He chuckled a little. He only seemed to enjoy the force even more each time he used it. It felt exhilarating.

Bio|Lightsaber|Theme|Appearance​
You must log in or register to reply here.

It's in Your Blood

Z
All Truth in Blood