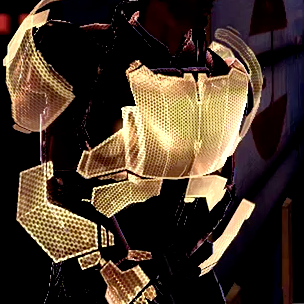 Intent: To create a new generation of personal body armor for sale on the open market.

Description:
Choosing to make the most of what is readily available, instead of mining precious Beskar, Mandal Hypernautics set out to find an innovative substitution to the rare and valuable metal. Eventually forced to take the high-tech route, Mandal Hypernautics developed Durasteel armored suit which emits ray shielding over key vulnerable areas of the wearer when activated. Running off of standard power cells, the armor can operate for up to two hours of continuous use. Though, heavy absorption of weapons fire can deplete a charge in as little as five minutes in some extreme cases.

A durasteel armorweave forms a bodysuit over the wearer of the armor. On the top of this bodysuit are several ports and anchor sites. Durasteel plates are then attached to the suit at these anchor sites. Individual Durasteel plates cover the Chest, Upper abdominal area, the sides of the rib-cage, to the left and right of the kidneys, the Left and Right upper back, over the kidneys on the rear of the torso, over the shoulders. There are also upper arm plates, elbow plates, forearm plates, plates over the back of the hands, plates on the front and back of the thighs, plates on the knees, shin plates, and a small plate that covers the upper part of the foot. The spine is protected by a series of small, interlocking plates.

On the back side of these plates and woven into the fabric of the bodysuit itself are various electronic circuits and devices. From these electronics and emitters hidden throughout the suit, the devices that project the ray shields are hidden. The ray shields are projected directly over the existing Durasteel plates, but are slightly larger and projected slightly away from the body. There are three setting for the shielding. Setting one just activates the shields that cover the chest and abdominal area, the second setting covers the entire front and rear torso area as well as the shoulders, and the third setting activates shields over the entire body, including the upper and lower limbs. This one is solid (shield pun). This is approved, pending another rpj's weigh-in!

Character Bio
Can you provide examples of key areas that are protected? Joints? Or other places? Examples are fine, no need to make a list of every single area.

does that suffice?
​
"The Technology You Need, The Quality You Trust."​