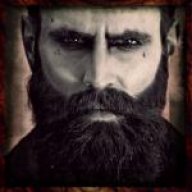 Snow. Oh how the kitty hated the snow. It was so... cold, and quickly covered anything that did not move. Kitty's master had stayed still for to long, and now lay forever dormant. All due to the white flakes that covered the planet. Even the force had been unable to keep her alive through it all. No... it had run out, while the lack of heat wrapped its figurative hands around all life. When it had, the master had died. And the kitty had awoken.

Now steel grey claws swiped at the snow, desperately trying to dig themselves out. After 500 years, the landscape had changed much. Who knew how much, or how little snow now trapped the Cathar. Or kitty. The master had always referred to her as a kitty. Vorzek originally hated it. But as the two grew closer... she accepted it. They were almost like mother and daughter. But now mother was gone, and kitty was alone.

Rage fueled her. Anger at the inanimate particles that slew her family. It would take some time, but she would escape. And eventually, if time allowed, she would return to Hoth and burn the blasted planet to a crisp.

"How long did I rest?" Vorzek thought, momentarily stopping in her tracks. The former Sith Apprentice had no answer for herself. Another whip of wind hit her, and she started her trek again. Soon she'd arrive at the outpost. Answers would likely be found there. Or so the kitty hoped.
You must log in or register to reply here.
Share:
Share
Menu
Log in
Register
Install the app
Top