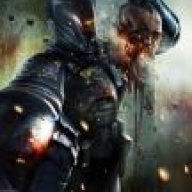 FACTION: Hasn’t got a faction but works for anyone that pays him enough.

RANK: None needed but is known around.

SPECIES: He is a human from Thyferra.

Stubborn: Hikari is difficult to sway once he has reached a conclusion or developed an opinion.

Enemies: Through the course of action on Corusant, HIkari has acquired enemies in the Cleansed Flame gang. They have tried to kill, capture or imprison him through the years.

Combat: A master of all weapons be they bladed or ranged. Has taken on Force Sensitive combatants in the past and come out of it unscathed.

Hikari when in the field wear a modified black suit of plastoid composite armour complete with a specially designed helmet. The armour has been scarred and modified throughout the years and is topped off with an assortment of blades and guns.

Hikari, a human originally from the jungle planet of Thyferra. As a young boy he followed his parents, diplomats, throughout the galaxy for most of his childhood, Hikari somehow never learned the moral and ethical lessons that his parents tried to teach him.

To the disappointment of his parents, he didn’t embark on some prestigious career. Hikari simply just dropped out of sight and began drifting from planet to planet, working odd jobs. According to Underworld legend, one day he saved an old man from being run over on Nar Kanji or Naboo or Corellia depending on who tells the story. That encounter changed his life.

The old man was Ty Kijada, known throughout the galaxy as a Master Assassin par excellence. Grateful to the young man, Ty struck up a friendship with the young man. Seeing a kindred soul, he offered to teach Hikari the tricks of his trade. Ty, though he was too old to ply his trade anymore, he could still show Hikari the ropes. Hikari, at first intrigued and then genuinely excited about something for the first time in years agreed.

He spent the next few years about Ty’s ship travelling the galaxy being trained by the master. Although he’d never been disciplined, he took to the task like a fish to water, soon surpassing even Ty himself. When Ty was killed by members of a Crime Syndicate called the Cleansed Flame. He was left Ty’s ship and his droid. When he’d finished with the gang he embarked on a career which today has left him at the pinnacle of his profession.

The Myrmiddon, a VCX-100 light freighter that he inherited from his late Master.

He has a few associates. One is the droid that came with his ship. The RA-7 Protocol droid is known simply as SIX.