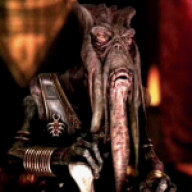 STRENGTHS AND WEAKNESSES:
+Devious Mind - Hexus is always plotting against you, even if you're his brother, his lover or his closest friend. This approach to life has earned him all he owns.
+Poker Face - Hexus, as is helped by his insectoid appearance, is a man who can present a calm mask in the most desperate hours.
+Gold Digger - Hexus is very fond of (and possesses a lot of) money, a resource he's collected through backstabbing.

-Clipped Wings - Hexus' wings are not much more than stunted, shriveled twigs emerging from his back- a deformity that occurred at birth. Flight is not an ability he possesses as a result.
-Power Hungry - Hexus adores power, more so than even himself; it's made him few friends.
-Pride And Prejudice - Hexus has too much pride for his own good; his ego is something he nourishes daily.

APPEARANCE:
Hexus is a buglike geonosian, spindly in build and with stumpy, malformed wings twisting from his ridged, coarse back. His exoskeleton has a grubby umber sheen to it, looking almost slimy in the right light. From his hands protrude slender, bony fingers; fingers coated in the blood of a hundred enemies.

BIOGRAPHY:
Hexus was born into the lower caste of Geonosis; his wings were stunted deformities, and so he had no place among the warrior caste. His hive was by no means the ruling hive, and so he toiled for years building opulent monuments for the richer castes; a failed bout in the arena cost him most of his right hand, and so he never pursued such a career any further. An accident during the construction of a titanic spire cost a nobleman his life, and so Hexus assumed his identity, becoming a 'reclusive' archduke; several other high-ups also found themselves encountering accidents, their credits finding their way into his hands over the course of several years.

There was little to do upon the desert planet, and so he departed in search of greater things. using some of the wealth he had mustered to purchase a flying palace of sorts- the Capitalist, a Luxury 5000 yacht, from which he resided until he elected to affiliate with the Sith Empire.

Hexus adored power, and the Sith respected it.


Apologies for the barebones quality- I'm not good with bios :/
Bio​
You must log in or register to reply here.