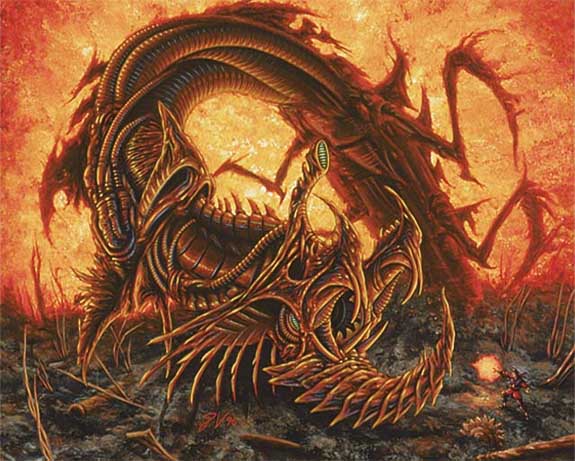 DESCRIPTION
When most people see thirty foot sand worms consuming and rampaging, they are driven to fear, possibly awe. [member="Enyo Typhos"] took notes; here was something she could use, once the erratic organic flesh had been stripped away.

Therefore, the Karakorum sand worm inspired Enyo to create a mechanical monstrosity which would be capable of burrowing underground, emerging and disgorging a full platoon of droid soldiers into the fray. In appearance it looks like a ten legged centipede (a decipede if you will) with armoured carapace and terrifying alien form. It is capable of doing things no organic piloted craft could do such as operating in the jolting, airless, claustrophobic ground.

The key component was a rotating plasma drill on the head which allowed it to vaporise material whilst its many segmented legs propel it through the ground. Sand and soft soil are obviously the easiest to do through though it can penetrate hard rock and concrete too. When it emerges from the ground its drill becomes a formidable weapon to penetrating buildings or vehicles, whilst weapons and droids emerge from it to complete the attack. When above ground, the Hellmaw is equipped with a deflector shield and can retract into an immobile shell. It cannot attack in that state but it has incredible resilience.

The main weaknesses of the Hellmaw are that once it is above ground it has lost the element of surprise. It is slow above ground and not equipped to deal with heavy armour except close by. If not supported once it makes its deep strike the Hellmaw can be overwhelmed by enemies, or shot down by heavy artillery or ion bombs. It is important therefore for the breakthrough it causes to be supported and reinforced by fresh troops.

Maelion Liates said:
Speed. Above (and even below) ground, the Hellmaw is very slow.
Click to expand...

[member="Raiz Australis"]
Changed, though it's all difficult to establish relatives.