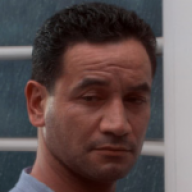 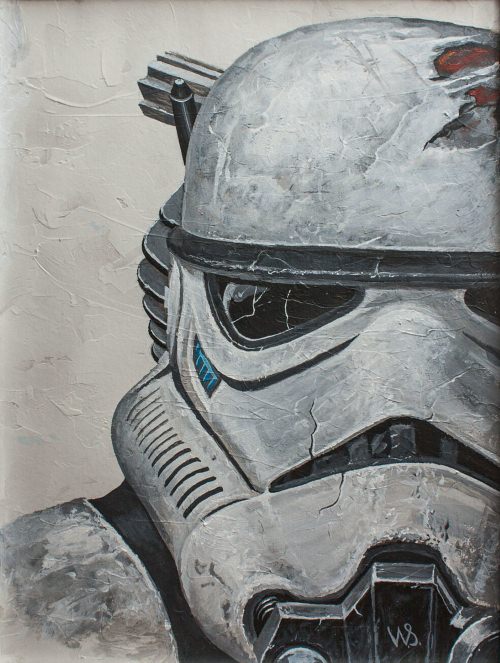 +Military History: Hatchet is, for lack of a better term, a bad man. A veteran of military training and battlefield experience, he knows his way around all kinds of weapons and the sentient body, along with how to make it stop working real quick.

+Steely Gaze: Though many of his stock are similar, Hatchet is known for his particularly intimidating stare. He has a form of animalistic, predatory charisma that makes others believe he is much more dangerous than he may really be, and just a look has been known to scare some off.

-Civvies: Much like other Fett clones, Hatchet grew up with a belief that he was a superior soldier to others. Now, not so much, but he's much more trusting of those with a military background, even if it didn't turn out so well.

-Not a Chance: Hatchet is stubborn, to a fault. He makes snap decisions and judgements about people and will often stick by them, and it takes a good degree of questioning himself before he will change his mind.

Hatchet just happens to resemble Jango Fett, and pretty much anyone else of the same genetic stock. He has the same brown eyes, tanned skin and dark hair, though he shaves it bald on occasion. He is a tough-looking man, and unusually for one of his background, is often found more out of armour than in it, if he can help it. He doesn't like being weighed down, not anymore.

Grown as part of the Fett stock on Kamino to fight and die in the Great Galactic War alongside so many others, Hatchet has been fighting his entire life. He was birthed from a tube and brought out to train not only in physical fitness, but in tactics, strategy, protocol and doctrine. Like the brothers that stood alongside him, Hatchet was the perfect soldier. Or at least, he was supposed to be. The Clone trooper often held some quiet, rebellious thoughts that plagued his mind, that egged him onto do things that he shouldn't be doing, even if these were just small things compared to some of the real infractions that the non-clone comrades he was signed up with committed.

Things came to a head when Hatchet got into a physical fight with another trooper, a non-clone, beating him to within an inch of his life. He was stripped of his rank and sent into the vanguard of a low-performing company, expected to die on the battlefields of Dagobah. The company was devastated, taking losses all over the place as they weren't able to properly compete with the Galactic Alliance forces and their superior knowledge of the environment.

Betrayals by Imperial forces and muddled communications made it even harder on the unit, and soon they were whittled down to a pathetic number of men. Hatchet was left covered in mud and blood, feeling like a fool for believing himself anythng close to a superior soldier. What was left of his company escaped on an emergency shuttle, and it left him with much to think about. It was only later on, when one of the survivors mentioned being dismissed from duty for Trauma affecting him so poorly that Hatchet had an idea.

Using his wiles and what charisma he possessed for a clone, he managed to get his hand on forged forms that were signed by the assigned Medical Officer, claiming that he could be let go on medical discharge grounds. Luckily for him, it went through, the discrepancy only being noticed later if at all. Hatchet took transport on the next ship into the farther reaches of the Outer Rim, seeking something else for himself.

Character Bio
Reserved too
You must log in or register to reply here.

Oh no, another clone