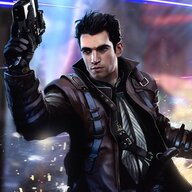 Greyden Sulcan strode confidently into his employer's club, a wide grin struck upon his face. He had spent months working for Hugo, doing grunt work for grunt's pay. He knew what he wanted, his own ship in order to end his status as an employee, and begin his work as an employer. In the time he had spent working on Nar Shadaa he had eaten nothing but the questionably cheap noodles from the stall nearby.

But now, the money the criminal had saved had been spent on a T40 Heavy Freighter, christened The Calliope. Greyden saw Hugo standing at the bar, talking with one of the girls who worked here as well. "Hugo!" Greyden exclaimed, entirely unsure of how his boss would react to his sudden resignation. The man knew Grey's intentions of eventually purchasing a ship to start his own smuggling ring, Grey kept the man out of the loop on how close he was. Hugo spun around, and a smile was born upon his face immediately as he recognized the man.

"Sulcan! What are you doing here? You're off today." His smile shone on after he spoke, unaware of the bomb being dropped on him. "No, not today... Or ever again, my friend." The smile began to fade. "I've purchased my ship, The Calliope. a T40 Heavy Freighter. I'm starting my runs soon." Grey's smile continued, and by now Hugo's had almost turned to a frown. "Where'd you get that money, Grey? Not from me, I hope." Grey waved his hand, "I stole nothing, Hugo. I ate nothing but noodles and slept in a closet for months. Now come, I'd like to show you."

The walk to the ship was short, due to the location of Hugo's club. When the duo entered the hangar in which The Calliope was held, an armored man with a rifle instantly brought his aim upon them. Grey brought up his left arm, using his forearm to cover his face as he shouted, "Kark sake, Cole! It's me!" The armored man quickly lowered the blaster and hurriedly ran over to the duo. His helmet was off and he began apologizing profusely. "Oh, Mr. Sulcan! I'm so sorry! I'm a bit jumpy, 'tis all." Grey waved the young man off and ushered Hugo closer to his ship. "Young kid I brought on to guard the ship while I'm gone, can never be too careful on this planet.." Truthfully Grey had already begun thinking about bringing Cole on full time, if the kid was willing to begin life as a smuggler. Young and inexperienced, but full of heart and willing to learn. Grey figured he could do with someone like that.

Hugo spent a moment checking out the ship. "I'm happy for you, Grey... But you leave me in a bind." Again, Grey waved off the comment. "Look Hugo, a ship. Owned and operated by one you know. This is a business venture. All those shipments of spice you receive? You add me and this beauty into the mix and it cuts your costs in half." Grey smiled, having thought out this interaction days in advance. Truly, he would be able to help out Hugo in order to let him off. But all that extra cargo space...

"You can grab another grunt off the street. I'm more than that now." Hugo was scratching his scraggly beard, without a response for a few moments before nodding. "I'll let you know when I need you, Grey." He said, then suddenly spinning on his heel and leaving to go back to his club.
You must log in or register to reply here.

R
Crime Never Pays....Well It Does.