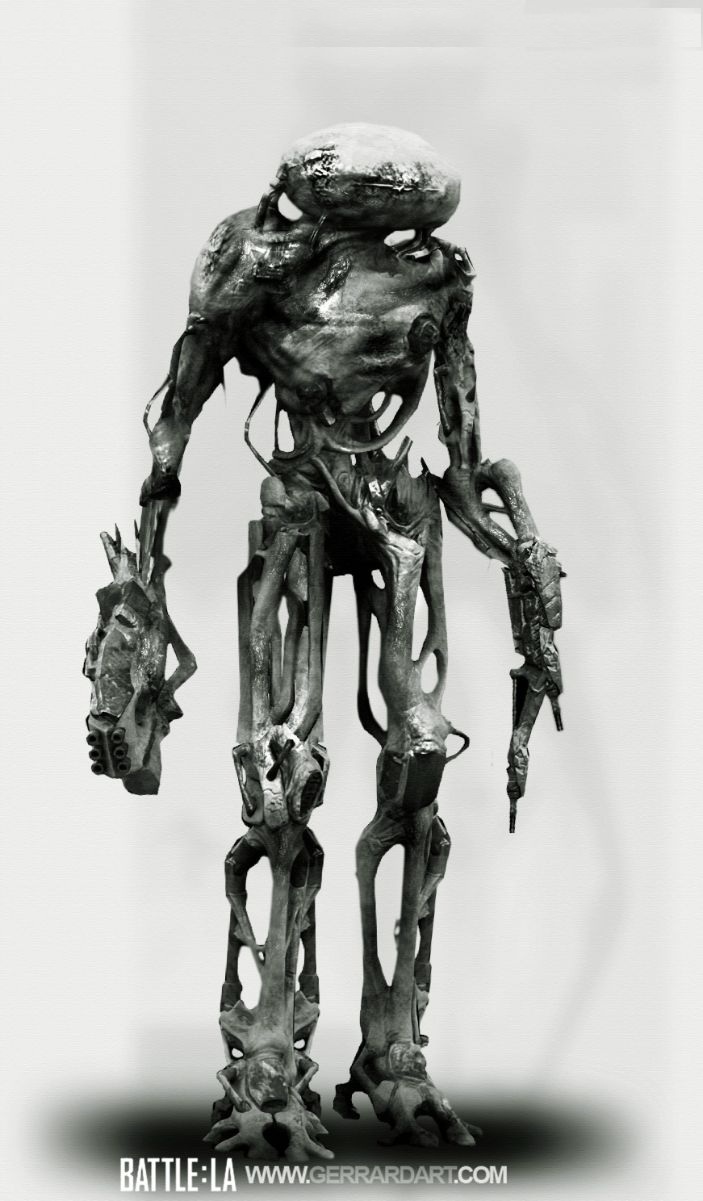 -The Hantarian are an extremely smart species, most of their head consisting of a complex system of nerves that lack ears and eyes as most sentient beings would understand them. With this complex system of nerves, it allows the Hantarian to act like organic super computers that can solve problems in seconds that would take normal sentient beings months.

-They are skilled engineers who are renowned for their shipbuilding and skills with cybernetic implants.

-They are skilled tacticians known for their ability to plan and execute military operations with uncanny precision.

-The species is amphibious and can live both above and below the ocean. They are also excellent swimmers that can dart through the ocean without any assistance and even match the speed of assault subs or speeders while underwater.

-Physically the species is very weak, despite their average size. Even the fittest of the Hantarian can barely match the strength of a average athletic human.

-Being that their bodies are modified during adolescence, to assure motor functions that they would normally lack, the species has become very reliant on technology. Without their advanced technologies, specifically ones geared towards being lightweight, the Hantarian would be at a severe disadvantage.

-The religion of the Hantarian makes them very protective of the waters of any planet and are prone to becoming obsessed with the confiscation of waters from other species. There have been cases of Hantarian threatening invasion of other planets based on their treatment of the oceans alone.

-The Hantarian have no eyes and must rely on sonar-like pulses of force energy from muscles in their heads to see. This sight is limited and they can only see what the pulses touch and is usually limited to about 8 meters (depending on scenery).


Workers are made smaller, to fit in spaces easier, and are usually adapted to have finger-like appendages and welding tools permanently integrated into their arms. Warriors and elites tend to have bladed tentacles on their hands and are adapted to be larger and have blasters permanently attached to their arms. The leader caste is augmented to be the tallest and have their legs replaced with claw-like repulsor devices that allow them to float above the service and grip multiple things. While under water they can use this device as a jet to launch them through the water at dizzying speeds.

“In the beginning there were two great beasts, the sea-dragon Mistarana and the fanged fish Corathen. Mistarana was a peaceful goddess who grew board of swimming around the emptiness of space, while Corathen had grown accustomed to the vastness of the void. Mistarana pleaded for Corathen to fill the universe with water so that they could laugh and play, but the God would have none of it and instead created stars for her to gaze at.

“Look upon the lights I have created” the God Corathen said “They are more beautiful than even ourselves and they shall keep your attention for eternity. Now bother me no longer with this nonsense of filling the void with water!” and with that Corathen returned to basking in the emptiness.

The stars would keep Mistarana’s attention for quite some time, but eventually she grew restless once again and pleaded for Corathen to create more for her amusement. Reluctantly, Corathen created solar storms and galaxies for her so that she may dazzle at their lights while he would stay in the darkness between the galaxies and bask in the emptiness. Again, Mistrana grew bored of the things that Corathen had made for her and decided that she must have the water she had been pleading for. So, the Goddess began to create water from the emptiness of space and spent many days shaping it into the form of a sphere.

When she had finished molding the water, she placed it gently on the edge of her favorite galaxy. Once it had been done, Mistrana began spending all of her time splashing in the waters of the new planet and creating many creatures to keep her company. It was not long, however, until Corathen noticed that she had been missing and went off looking for her. He searched every galaxy until he came upon the planet of Mistrana’s creation. So angry was Corathen that Mistrana had created water behind his back that he burst into a fit of rage that shook many scales from his large body. His scales would fly across the galaxy and become the planets that now fill the universe.

“How could you defy me!” Corathen shouted “you fill the void up with more and more until now it is so full I can no longer swim without bumping into something new!” and with his mighty tail he destroyed the water planet and sent the oceans crashing across the galaxy and landing upon many of the worlds created by his scales.

Mistrana, angry at Corathen for his destruction of her planet, attacked the great fanged fish. The duel would last for centuries and change the faces of each planet forever. Some would become dry from the heated breath of Corathen while others would be covered up in scales from his body as he tried to cover up the oceans.

This is only part of the story which leads into the defeat and banishment of Corathen who creates the netherworld of the force as his lair. After his defeat, Mistrana goes on to recreate her planet which becomes the homeworld of the Hantarian race. It also depicts multiple “good” goddess and gods creating other aquatic sentience across the galaxy and details the formation of non-aquatic sentience from the scales of Corathen.

In a nutshell, Oceanic Cultism teaches the belief that water is what all planets were originally made out of and that all water originally came from Hanta I. Through this belief, it is culturally accepted that the Hantarian have a right to all water in the universe and are obligated to protect it. Non-Hantarian followers of Oceanic Cultism do exist and are usually other amphibious sentients who think they are just as obligated to defend the oceans as the Hantarian are.

It is believed in Oceanic Cultism that those who are evil are sent to the Netherworld of the force which is ruled by Corathen who devours the most evil of souls and uses the rest as eternal labor. Those who are seen as righteous are ushered into the “Great Reef” a oceanic paradise that is ruled by Mistrana.

Over the past several thousand years, life has been evolving on the planet under its vast oceans that completely cover the planet. It is believed that sentient species began to appear around the time of Darth Krayt’s Empire but did not evolve to full sentience until the time of the darkness. While the Gulag plague ravaged the rest of the galaxy, Hanta was sparred due to the lack of tourism or any real population.

A few centuries into the darkness, the newly sentient natives used their naturally powerful minds to decipher the secrets of ancient Rakatan temples found under the ocean. As it turns out, but is unknown to the natives, the world used to resemble Earth with massive continents and oceans separating them. However, after the fall of the Rakatan Empire the oceans began to rise and extreme shifting of the planets plates soon turned it into an oceanic world.

After these old Rakatan ruins were discovered, the species shot forward in its technological understanding and soon began to forge a planet wide government while the rest of the galaxy fumbled in the shadows. The Hantarian even began to travel the galaxy again while the Gulag Plauge was still killing off the galaxies largest civilization. The Hantarian saw this, however, and instead of trying to make contact they began to search out options in other galaxies.

The species would never colonize outside of their own galaxy, but they did launch such a colonization effort against a planet of primitive sentience. Little is known of what became of this colonization effort aside from the fact that it lead to a full scale attempt to annihilate the native species and ended with the primitives defeating the technologically superior force. Since this supposed defeat, the species has never again attempted such a expensive and large operation outside of the galaxy.

Once the darkness ended and civilization began to recuperate, the Hantarian decided to make contact. Their technological skills and scientific knowledge led them to become renowned shipbuilders and the planet now imports the materials they lack to make modern warships and then uses these materials to build starships in mass and sell them to the highest bidder.

It was soon after this making of contact that the Hantarian way of life began to appeal to many aquatic species throughout the galaxy and began flocking to the planet. Many Mon Calamari left their planet to become the middlemen for the Hantarian and their clients and Quarren came to sell their goods to the species. Eventually a large amount of Karkarodon flocked to the planet as the culture appealed to them and they were offered good money to serve as the Hantarian’s enforcers.

As the species grew in popularity and their ships got more popular, they believed it to be a necessity to make it more difficult for a foreign power to invade. To do this, the species covered their planet in an artificial veil of clouds with a machine of their own creation. This veil obscures the ground from view and keeps satellites and ships from being able to conduct thorough scans of the surface. In order to see what is happening beyond the clouds you must enter past the atmosphere which puts you at great risk of detection.

Character Bio
@[member="Ronin Fel"]
Looks freaking epic. Another species I want to make a character of! Props on the Religion section.

added the copyright of Columbia Pictures and Original Film Studios

Character Bio
@[member="Ronin Fel"]
Need links to the pages where the images were sourced from! Then it's on to Approval town!
[ Sword | Armor | Ship ]