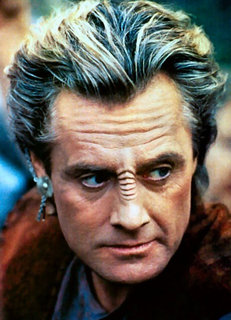 Smell: The Grakki have an incredible sense of smell, able to smell specific scents up to several kilometers away if trained properly.


Weaklings: Due to generations of living on a low gravity world, the Grakki have developed weak muscles, unable to lift much.

Uneducated: The culture of the Grakki spurns innovation and demands conformity and ritual, thus the Grakki are extremely uneducated.


CULTURE
The Grakki are not what you would expect of a species living on a world which is not where they were born. Incredibly primitive in their mentality of the universe, the Grakki believe everything to be the results of supernatural forces, from disease, misfortune, and war to happiness, existence, and well being. These supernatural forces usually take the form of their main deity Mectus and his pleasure or displeasure with an individual. Mectus, in reality, is an Artificial Intelligence the Grakki built before being reduced to this primitive state, and acts as the deity they portray him to be. Other supernatural forces can be negative spirits inhabiting a person to cause illness, where sacred rituals are used to cleanse the individual from this spirit. These rituals are in reality medicines and surgeries, however, the Grakki have long lost the knowledge of the complexities of these procedures, and only manage to do them with the assistance of Mectus.

The Grakki have also lost a great deal of their scientific knowledge on other matters, physics and other hard sciences as acts of deities or spirits. The machines they continually upkeep due to ritual and tradition are far more complex than they possibly understand, and are simply given instructions and the materials to build them from Mectus.

Grakki believe in more than just Mectus within the spiritual realm. They believe that ancestors, upon death, return to the afterlife, which they have named after their old world of Brakkus. However, they do not know the significance of this name, believing they have always existed on Kassus. These ancestors, if they have accomplished some great feat or are a hero in Grakki lore and mythos are revered as family deities, watching over the bloodline and making sure it is prosperous.

The Grakki are divided into a few hundred great families, each one named after the original inhabitants of the lunar base that became their species new home. These ancestors are simply called "The Creators" as they built both Mectus and The Habitat. They are also credited with the creation of the universe, how that legend came to be is unknown. These great families have a few familial deities specific to each one, very rarely do more than 1 family worship an ancestor as a familial deity.


The Grakki were once a proud and prosperous race. They spread over their homeworld of Brakkus with general ease, cooperation allowing them to conquer the islands and continents of their home early on in their history. They were descendants of human settlers who crash landed on the planet and were reduced to an industrial age tech level for several centuries, burning coal and gasoline to fuel great factories on their new homeworld.

The ship that crashed with them on board was filled with engineers and scientists. These engineers shared their knowledge and primitive clockwork and gasoline based droids emerged early in Grakki society. Droids became an important part of their society, instead of domesticated animals or slaves one would spend large amounts of money to build these primitive clunky droids.

As their technology and society progressed, several large alliances of nation-states emerged. Each alliance surrounded a unique ideology and belief system and thus distrusted the others. A cold war ensued which lasted for several hundred years. Near the end of this cold war, an agreement was reached to cooperate to send colonists to a nearby planetoid, hoping to foster better relations between these alliances. However, these alliances would ultimately consume their world in atomic fire.

Only the best and brightest were sent to these lunar bases, and they all knew as they saw their world on fire that they had to band together to survive. Upon gathering at the largest facility and bringing all the resources they could, they held a consensus on what to do and how to survive. One of these decisions led to the creation of Mectus, an AI to run the facility and to ease the logistical burden from the organics. Mectus was tasked with one goal, to make sure the Grakki survived.

Over generations, the knowledge gained by these scientists and engineers would fade and the more tribal society would emerge. Mectus saw what was happening, and instead of stopping it he kindled the flames and encouraged it. This was meant to control the populace easier and thus fulfill his primary directive.

Since then, the Grakki have slowly continued to expand and regain their numbers. Their culture and religion revolving around efficiency and logic rather than emotion and frivolity that ended up destroying their homeworld.

I followed the image credit link, but the image you are actually using does not seem to appear on that page (other Bajorans yes, but not that image). Can you please link to something that contains the image (or else to an image that is *on* that page if the former is a problem)?

Smell: The Grakki have an incredible smell, able to smell specific scents up to several kilometers away if trained properly.
Click to expand...

I assume you mean *sense of smell*? To say they have an incredible smell means that they themselves have a scent.

I'd also like you to expand on their general behavior, and well as their history.


Right! Thank you for correcting me.

I made all the edits and it should be far better than before. I'll work on the other two subs momentarily.

Sorry, it's been taken care of.