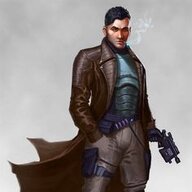 SPECIES: Geonosian (Born without the hive mind mechanism through mutation.)


STRENGTHS AND WEAKNESSES (Required: 2 Weaknesses Minimum) :
Weakness: No ethics: The mercenary part of him causes him to have no ethics, taking jobs only for money and not if they are right or wrong.
Weakness: Can't have friends or family: His disconnection from the hive mind at birth causes him to feel no connection with anyone else.
Strength: Dangerous Fighter: Goozer is a fighter that could rival Jedi and Mandalorians.
Strength: Physically Fit: He has almost no health problems and is physically fit for a Geonosian.

BIOGRAPHY:
Was born into a hive of Geonosians, except he was born with a mutation, an extremely rare mutation, where he had no connection to the hive mind. He was forced to work for the hive until one day a Tie Fighter landed on his planet, he stole the Tie Fighter as Imperials destroyed his species, making him one of the last Geonosians. When he found out there was a faction that would support him as a mercenary, he was quick to join them, he soon became one of their best known fighters, and best feared ones too. After a year of serving the Confederacy of Independent Systems, he has become very well known as an enemy of all who stand against the CIS.

SHIP:
Customized Tie Fighter, with a hyperdrive, shields, and an army camo paint job, along with the Confederacy insignia on the back of the ship.

BOUNTIES COLLECTED:
Post the names of any bounties you have delivered and the amount of money you gained for it. If possible, include a link to the thread in which it happened.
You must log in or register to reply here.
Share:
Share
Menu
Log in
Register
Install the app
Top