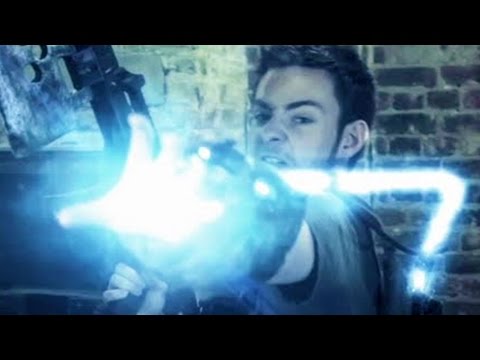 Gravity Anti-quark Manipulation E - Suit
Intent: To create a completely mechanical mimicry of the Force
Development Thread: http://starwarsrp.net/topic/18379-upgrade-in-progress-mai/
Manufacturer: Jak Sandrow
Model: JS01-FXC non-powered suit
Affiliation: None
Modularity: Armpieces are removable, as are optional leg pieces
Production: Unique
Material: Durasteel frame, plastic fuel lines, dual power (crystal and main battery); cobbled together from tractor beams, repulsor pallets, and artificial gravity generators
Description: The GAMES is a suit designed solely to mimic the power of the Force. It combines antigravity with tractor beams to create a telekinetic effect; this has a side effect of creating a blue sheen around objects being lifted or hovered, and a red sheen around items being thrown down.
The arm frame is fashioned with simple durasteel bars and pneumatic hinges. Several straps along the structure hold it in place, and an extra movable joint is added to the wrist-palm connector(s). A thin backpack supports the cold fusion cell, and holds the minicomputer for the arms. Additional components allow the user to use the "Farce" simply by thinking about where they want things to move.
The repulsors, attached to the hands as well, allow concussive blasts to be shot at people.
While all this may be possible, it is fairly crude, and is nothing compared to the Force. However, it is quite effective, especially at close range.
It doesn't provide any protection against large groups of enemies, so this armor is better for covert missions than anything else. Even then, the radiant energy emitted by its use isn't exactly covert.
It is ineffective at stopping any sort of blaster bolt from in front, and barely when retreating, so one needs to be really acrobatic to survive any number of armed enemies. *see video below* This can be hindered, due to the suit's bulkiness and limited flexibility.

The GAMES is not in any way a substitute for the Force. It is meant to be used solely when using the Force is a bad thing to do. Otherwise, it is not near as powerful as the Force - i.e. can't stop crashing spaceships, can't use in fancy maneuvers... However, in close quarters, it's nasty enough.
It is solely a simulation of the telekinesis part of the Force (i.e. it can only push, pull, throw, hold-in-place. ONLY). And as such, is not as powerful as the Force.

Character Bio
First off, this 'll need two dev threads, one for the Beskar listed in the materials, and one for the device itself, preferably a rather extensive one. Secondly, this'll need some hard limits specified in how much force(as in the scientific value) it can lift/pull. Thirdly, I'd like a bit more elaboration on what it can/can't do telekinetically. Is it merely a combination of pressor and tractor beams to pull and push objects away from the user or can it manipulate objects more precisely than that. Fourthly, I'd like a lot more canon referances to bolster what you're doing. The two biggest issues I have are with the thought reading system and what little you mention of sound. I know that the Empire worked on making thought reading technology for ships, but the idea was scrapped as the pilots couldn't handle the mental interface and I can't think of a smaller scale. Secondly, the only portable pressor or tractor beams I can think of were the weapons made by the Squibs, and they were extremely noisey. Is this similarly screeching? And if not, why not?

Character Bio
Okay, then I'm slapping a WIP tag on it.

Character Bio
Awesome. @me when you're ready bro.

What's the status of this submission, Jak?

Still WIP, but the dev thread is coming about.

Please refrain from constant reposting and remember to mention the person judging - other wise there is no way for a judge to realise it's ready.

Can you please state that this isn't a mimicry of the Force itself only basic telekinesis (push, pull, lift and throw) as individuals may try to claim it able to do other things. I know that the desc' touches upon this but it emphasises the Force mimicry above the telekinetic potential.

You tagged someone who isn't even a RPJ anymore, ergo this did not get noticed until now. The changes asked for have not been made, either. Please see to them.

Character Bio
Model is the Model-Name, not what it's made up of.

Add that it would be cumbersome (as it would) to wear and use, given all the components on the arms and chest please, @[member="Jak Sandrow"]