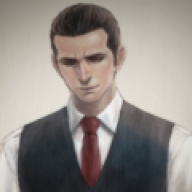 Physical Appearance : Due to his previous line of work, Gabriel has grown accustomed to sporting a more businesslike appearance than anything else, the plain white shirt and thin, sleeveless jacket becoming the staple of his wardrobe wherever he went. Going below, he sticks with his costume and wears a pair of formal pants, little trinkets he collected over the years stashed away in his pockets, from loaded dice to valuable playing cards, as well as the obligatory lucky credcoin that has seen it's fair share of rust over the years

Moving away from his clothing style, his body is nothing if not average. His muscle are not well formed on the upper side of his body, almost non-existant in fact due to the lack of working them, while the lower part of his body has some visible tone to it. His face, besides his costume choice, is the most unique feature he has. A stern look upon his face most of the time, trimmed eyebrows, a clean shave and short, slicked hair gave him the appearance of a professional in his line of work

Mentality : Compared to his appearance, Gabriel is a calm and rational individual, with a distaste for violence and a resilient attitude he has acquired from years at both ends of a gambling table. Resistant to threats and temptations at first, he easily crumbles over repeated attempts or under the lure of information, whatever it may be as long as it peaks his interest. To him, knowledge alongside profit means power, the two closely tied together. He believes that this two are the most important aspects of life, and is willing to go to extended lengths to acquire either, or both. When he has nothing to gain from an endeavor however, not even the thrill of the game, he is quick to flee, preferring to live to see another day rather than risk any severe injury. Yet, in the rare case the chips are down and the good are on even footing with the bad, then Lady Luck is the only person he can turn to, a quick toss of the credcoin deciding his allegiance then and there.

He views other people as a opportunity, and judges them by their worth to him first, and foremost. If someone can prove to be a valuable asset to him, he will do his best to keep them closely tied to him. Yet if they don't, they have no worth to him whatsoever, not even deserving of the breath he would waste on talking with them.

* Loyalty : Despite everything, he is a loyal individual to his employer once he picks a side and will stick with the organization until the most hard pressing of times where he considers it's chances of survival are almost non-existant.

*Connections : Gabriel has spent a large portion of his life in the slums and underworld of Coruscant and has managed to establish contact and relationships with dealers in the black market of the planet, as well as set up a small network of information.

*Sleight of Hands : Years spent at the casino table, both playing and working on it, have allowed him to develop rather dexterous and nimble fingers.

* Combat Experience : While he knows how to handle a blaster pistol somewhat, he is more or less useless in a brawl due to his lack of experience with fights and his physically weak body.

* Gamblers High : Once he gets himself knee deep into something, regardless of what it may be, Gabriel throws most of his common sense out the window and sticks with it 'till the end, consequences be damned.

Biography : Gabriel was born into a wealthy family on the upper levels of Coruscant, his father being a retired member of a crime family while his mother was a show girl that worked to pay off her debt. He received some of the best education money could purchase through his childhood in an attempt to keep him out of the slums of the planet and it's underworld. Regardless of his fathers attempts, he found himself affiliating with the wrong cliques and ended up where his father once was, as an errand boy for a mobster or another through his teens.

He spent most of his days in the slums of the planet, either doing odd job after odd job or wasting his money at a gambling table, to the point where the slums became like a second home to the man. Regardless of his connections with criminals and mobsters, he managed to avoid entangling himself with law enforcers. Developing connections over the years while working as an errand boy, he eventually formed his own little node of informants through the planet, either to gain information for himself or to sell it off to the highest bidder. His family, while not pleased with the fact that their son ended up where they escaped from, were still as supportive of him as they could of been.

Equipment : Several trinkets stored inside the pockets of his pants from his old dealer days, including loaded dice, a pair of high value cards regardless of the game and the obligatory lucky, rusted credcoin. Besides a bag in his hand, filled with several clothes and a couple credits in his pockets, he has nothing else in his possession at the current time.

Welcome !
You must log in or register to reply here.