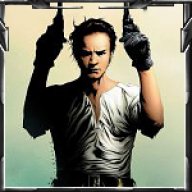 Character Bio
"Scars have the strange power to remind us that our past is real."​
-Cormac McCarthy​
​
Dekkan's past is ripe with opportunity for threading. He has a long and sordid history that can take place over many worlds, and in many different scenarios. I'd like to dig into that past with people who would be able to do so with their characters.

Currently Dekkan is the owner of the Do or Dine on Abregado Rae, but he wasn't always so mild mannered. Is anyone interested in creating flashback threads where your character might have crossed paths with a man whose been through hell and back?

If you're going to reply with "I'm in" or something that short, consider this. Consider where your character would be a few years back, and where would they interact. I'll meet you halfway.

Character Bio
Xardus visited a number of planets everywhere from Tython to the outer rim when he went on a hunt for his father's killer. It could be possible they saw each other a few times.

Character Bio
Your Avatar fooled me. Makes him look a lot younger than twenty-eight. I've got a fairly good time-line in mind, so if you can wager how many years prior you'd like to interact with Dekkan, I can figure out where he'd be during that time and pitch an idea or two.

Character Bio
How about ten years earlier, when he's in the prime of his rage? That would make him about 17-18. @[member="Dekkan Fray"]

Character Bio
Down, Jericho is a seeker of knowledge and goes on alot of lone mission, maybe they caught in something and need each other to get out?

(Is this an interest check or is this an actual role play thread? lol!)

Character Bio
This is a checking of those interested in past rp threads with my character.

So how far are you looking to go back in time?

Character Bio
Past RP? How past? I could RP when Jak was 19, and still new to the smuggling business.

Character Bio
Depends on the other person. I have a timeline in mind for him. Currently he is almost forty.

Well haven is secretly a diathim and is centuries old, so it doesn't matter to me.... although right now people think she is human and is 26 years old.

Dekkan Fray said:
Depends on the other person. I have a timeline in mind for him. Currently he is almost forty.
Click to expand...

Character Bio
I will reply later tonight with thread ideas once I am back on my laptop.

Xardus Folidaar said:
How about ten years earlier, when he's in the prime of his rage? That would make him about 17-18. @[member="Dekkan Fray"]
Click to expand...

@[member="Xardus Folidaar"] - Ten years earlier would put Dekkan right at the tail end of his terrorist campaign against his Father. If Xardus is in the prime of his rage, he might be taking it out in similar fashion as Dekkan was at that time, and I could see the two of them collaborating on the spot to take down a government vessel attending on a mission in one of the core worlds.

Jericho said:
Down, Jericho is a seeker of knowledge and goes on alot of lone mission, maybe they caught in something and need each other to get out?
Click to expand...

@[member="Jericho"] Do you have a time frame in mind?

Sargon Vynea said:
sargon spent time running around the galaxy as a trader then some time as a merc be good to join
Click to expand...

Haven Pryde said:
Well haven is secretly a diathim and is centuries old, so it doesn't matter to me.... although right now people think she is human and is 26 years old.
Click to expand...

@[member="Haven Pryde"] We could do something a few years ago then since age is certainly not an issue. Perhaps Haven is trying to track down the former terrorist (Dekkan) but upon discovering the truth in a confrontation with the man, things shift. Let me know if you're interested.

Elijah Rowlin said:
In my past life I was Jak. And I'm 21. So it could be a more recent RP.
Click to expand...

@[member="Elijah Rowlin"] There is always the diner, he's had it for a few years on Abregado-rae. Anything specific you have in mind?

Character Bio
@[member="Dekkan Fray"] He stopped his merc work about a year ago but for a good... six years he was doing illicit, and corporate merc work.... before that he was helping his father run a trading ship which he grew up on.

Character Bio
between 4-8 years ago

I'm game for that @[member="Dekkan Fray"]