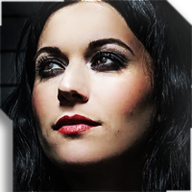 Character Bio
Darkness had begun to lick at the fading light of day; the colours that had once been so vibrant and welcoming were now a dark despair in swells of purple and grey. There had been something about the night - what dangers untold lurked in the shadows. Necropolis had been warm this time of season though the breeze that brushed through the air often a modicum of solace. With in a cathedral had been the figure of a woman nearly-time forgotten-the Netherworld not long ago called home though memories faded of that which would now be deemed as inconsequential-and beneath the dying light that peered through the stained-glass and the twitching of light from the fiery fixtures upon the stoned walls, the spikes on high heels gleamed. The Nightmother seemed taller than she actually was as her shadow stretched outward like some servant waiting in the wings.

A brow larked as a noise drew her attention from behind, but she hadn't moved. Long had it been since she jolted at the sounds of something unnatural or mundane. She had been through far too much to have ever given the slight shiver of nervousness or concern. Nothing was revealed upon her facial features as her head slowly turned. The crown of her tongue smoothly slid against the upper row of perfect teeth - she had been waiting longer than she desired. "Just so that there is no speculation in the future, I do not like to be kept waiting." Santeria had standards that were high, nearly impossible for anyone to achieve. The fact that anyone not of Decuir blood was there, however, was enough to prompt curiosity.

Heels clacked against the marble flooring while the Unholy Matron pivoted towards the entrance. She could smell it - that scent of a homeworld never forgotten. Dathomir. Witches from that beautiful, mesmeric place knew one another whether or not they actually knew them of a personal level. "So tell me young witch- what brings you all the way to Necropolis to see me?" Knowledge lurked deep into Santeria though only she decided what of that would be disclosed. Inquisitive still, there was the decision to entertain why her company was sought-out, and she was dreadfully bored. While she waited for an answer, the Nightmother moved to an unlit torch; a spell moved past blood-red lips while fingers danced across the wick until it was engulfed in flame.

Private The Padawan and the Nightsister