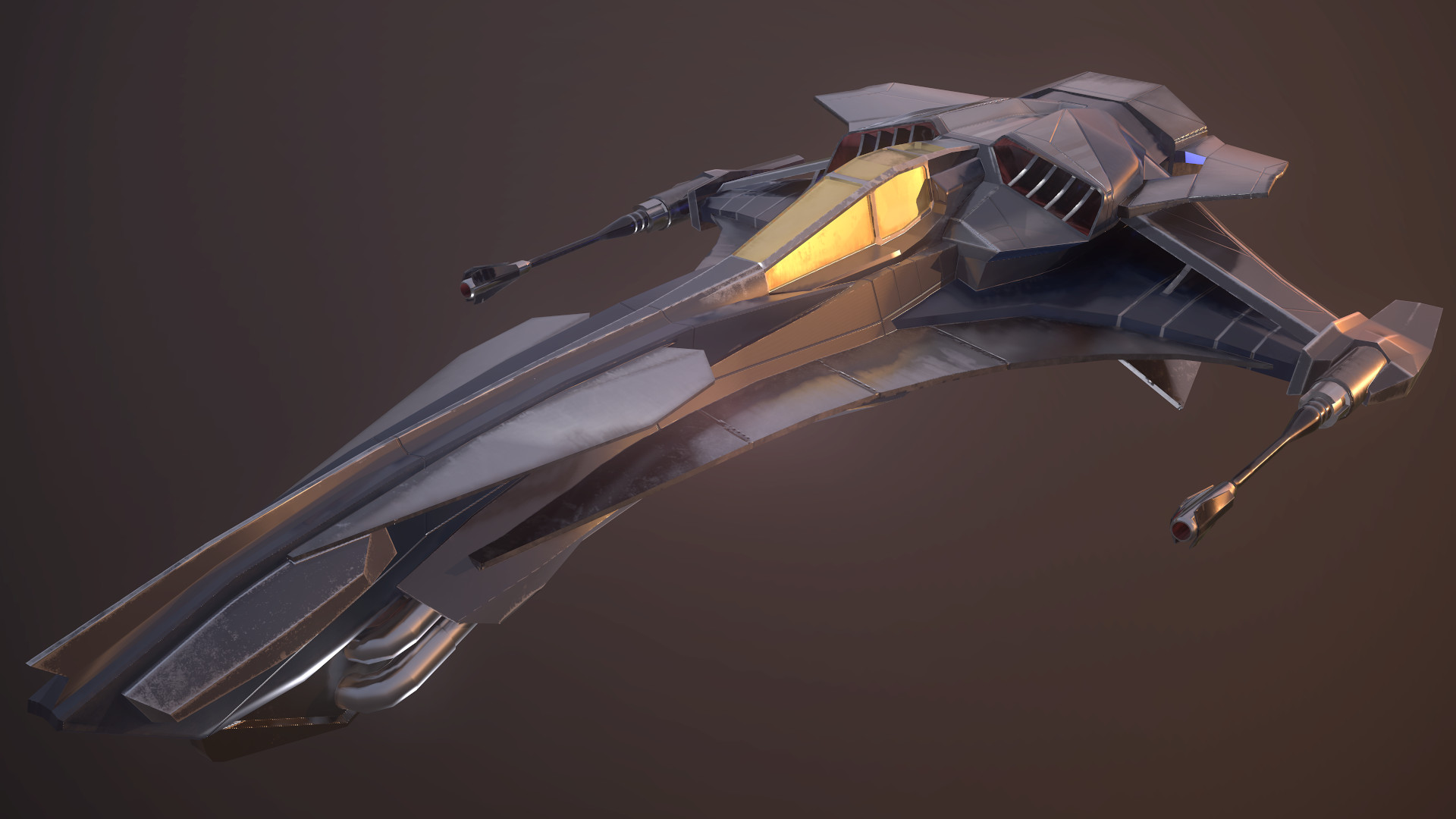 Strengths:
Weaknesses:
Description: The F-27 Serica is a spiritual child to the immensely successful Terminus-class starfighter. Unlike the Terminus, the Serica is a single-seat fighter that retains forward-oriented weapons. Just like the Terminus, however, the Serica can bring unmitigated pain upon enemies who don't happen to be right in front of the pilot. A 360-degree dual blaster cannon can deploy from the ventral hull, and advanced autoblaster targeting systems can keep up sustained fire on maneuverable enemies while the pilot's attention is elsewhere.

Along similar lines, the Serica has the option to deploy any number of obstacles in its pursuers' path, from tractor-scrambling Stage Three charges to micromines too small for sensors to pick up. Enemies who like to play games and apparate on one's rear screens quickly find themselves entangled by Connor nets, flummoxed by small gravity mines, pummeled by dual blaster cannons, et cetera. The Serica can also use segments of its deployables bay to carry small comm relays and probes, or even for grenade bombing runs.

For convenience in extreme circumstances, a second person can squeeze into a small seat behind the pilot. The compact fighter often uses this space for a portion of its survival supplies, so choose wisely.

A split ray/particle shield setup makes the Serica a bit better against multiple damage types than against a single type. For example, a laser barrage may leave ray shields at 10%, but particle shields will remain at 100% - but the same laser barrage would have done somewhat less damage to a standard deflector shield than to the ray shield. Simply put, weapon type X will hit harder than normal, but weapon type Y will face undamaged shields. A variation of standard power transfer technology (often used to shunt power between engines, weapons, and shields) allows a pilot to switch power between ray and particle emitters if needed. For example, if the enemy is only using mass driver weapons and a pilot doesn't expect to encounter energy weapons, the pilot can drain the ray shields to bring the particle shields back to full strength. Again, choose wisely.

Character Bio
[member="Jorus Merrill"], this looks like it's one rating too high, otherwise this is ready to go.

Dagnabbit, thought I'd finally gotten the new system right. Can you check my work?

Or is this a 'find another weakness or cut a strength' thing?

Character Bio
[member="Jorus Merrill"], absolutely. I do make mistakes as well, and I do appreciate it when people point them out. I don't want to give anyone the shaft when I judge their submissions, especially if it's a case of me accidentally clicking the wrong value on a spreadsheet.

It looks like we differ on the hyperdrive, but we're otherwise on the same page.

It's entirely possible to get a -2 rating for the hyperdrive, but that means that there isn't a hyperdrive at all. Here's the typical rating scheme used for hyperdrives (It does show up in the spreadsheet if you use it):

Character Bio
Ahh, that explains it. I don't use the spreadsheet, no - I've never managed to make it work on my devices - just the posted template examples and so forth. I dropped one rating (squadron size) and tweaked some small elements in the description. Let me know if that works for you.

This is probably my fault from not providing you with better annotation in my previous post. Very Slow applies to hyperdrives slower (but not equal to) than x4.

If you'll change this to x5, we should be set.