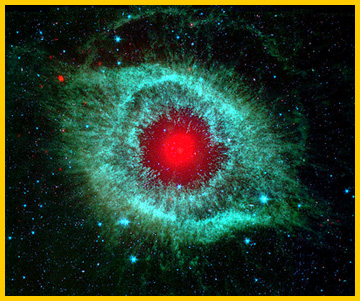 History:
-Brief History:
The Eye of Flames was once a binary-star system (Two-Star Helio-Centric system). There were two stars, and eight planets. Millennia before any civilization came across the system one of the larger stars began to devour the other. The effect was felt in the force and in the physical realm. In the physical realm, the smaller star went super-nova and exploded in a cataclysmic ball of doom, that destroyed most of the planets- except for three, one of which becomes Aza'Zoth (homeworld of the Lords of Shadows). In force, a wound was opened by the devouring of the other planets and star. The larger star, in its devouring, became a ferocious center of the dark-side. In other words a natural nexus of the dark-side erupted from this violent natural act. As a result the nebula omits a foul dark-side aura. (This very same aura is what attracts the fore-runners to the Aza'Zoth Cult Lords of Shadows). Inside the nebula there is a constant imbalance which causes frequent nebula storms (natural force storms) and solar flares. Inside force users are thrown about in a nauseous confusion as they are bombarded with dark-side energy. Only those that are bond to the darkness of Aza'Zoth can navigate the nebula, as they use Aza'Zoth as a force reference point as to not get lost in the darkness (that is of course if you know of its existence, which only those of the Lords of Shadows do). Throughout Galactic History most traders, explorers and vagabonds have avoided the nebula. Only the Rakata centuries before, dared enter and used the Nebula as a place to exile criminals of the Infinite Empire. The Rakata would come to name the evil star that ate the other star, Haelos Morgül- The Demon Star. Due to all this the nebula has been left alone for centuries and has kept the homeworld of the Lords of Shadows secret.

Notable PC's:
-Val’Ryss Zankarr was the original High Lord of Shadows of the planet Aza’Zoth back in the Hundred Years of Darkness. At the current moment she has returned to the planet; re-opened the gates of the dark-fortess-House of the Undying and as re-kindled the fires of the Dark Forge.

Intent:
-To provide the Lords of Shadows a lore-rich and IC reason for Aza’Zoth remaining hidden for centuries and to expand the background to the Elder Ruins Sector; in order to produce a scary and exciting atmosphere for other RPers to explore.