Okuro roamed through the Temple of the Silver Jedi Order, his sky blue eyes examining every corner. He was alone, at least for now, trying to find something to entertain himself. Between dueling Younglings like the late Anakin Skywalker, and having weird dreams in his sleep, there wasn't much to do as far as fun was concerned. Okuro was a rather hyper young man, and needed to be moving around most of the time or he'd get all fidgety. He continued roaming, trying to stay hidden as best he could. He didn't want to be caught anywhere he shouldn't be. 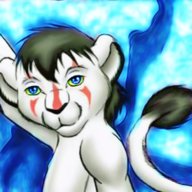 Character Bio
From behind a temple pillar a pair of glowing sapphire eyes peered at Okuro as he poked around the temple. A faint little chuckle would echo the halls, the voice soft and youthful.

Stepping out, it would seem as if Chaca had simply appeared from thin air. The force would have given Okuro the feeling of being alone, until suddenly he would feel Chaca's presence...or lack thereof.

Where Chaca stood, it would feel like a large gap in the force. To force users, Chaca's position felt like a hole in space, a void in existence. But in appearance, he looked like a normal, innocent, young Cathar.

He crouched, almost playfully, long tail lashing as he spoke directly to Okuro

"Son of a--!" Okuro jumped, almost knocking over a vase but quickly catching it with the Force. "Lost? Me? Nahhhh, I'm just new here. Who...are you?" He asked, looking down at the being before him.

Character Bio
The small ivory cathar crouched in an almost primal manner, his clawed fingers splayed on the cool temple floor. He looked almost tribal, a wild gleam to his eyes, which squinted slightly when he laughed. He lacked any clothing, and cryptic black hieroglyphs covered his body, drawn directly on his ivory fur. He looked as though he had just walked out of some sort of ancient ritual. Startling Okuro had made the boy chuckle a little.

The unusual little cathar prowls forward, on all fours in an almost animal sort of way, looking up at the vase that Okuro had just managed to catch with the force

Chaca said with a mischievous little tone. He seemed to keep a few feet between he and Okuro as though something unfortunate might happen if he had gotten to close

With a playful and inquisitive little grin, the boy stood up to full height next to another nearby vase on a pedestal. He slowly reached out, taking the vase in his grasp

He asked, grinning before tossing the other vase into the air, seeing if Okuro would catch it too while maintaining focus on the other vase

"Can I juggle? Of course I can!" He caught the other vase with the Force as well, moving them around. He didn't need to use his hands, but he did so to make it look more like he was physically juggling. He then lifted the boy up, adding him to his little circle of juggle material, all the while humming a little tune one would hear at a circus. He was just glad the space was open enough to juggle two vases and a small boy

Character Bio
(Sometimes it takes me a little while to post. Will have one up pretty soon, got kinda busy ^-^)

[member="Chaca"] (Alright, just making sure my post went through. Sometimes there are lil errors >~<)

[member="Chaca"] (I really don't mean to seem like a pest, just want to make sure you didn't send something and I didn't get it. That happens sometimes and I just wanted to make sure.)

Character Bio
Chaca grinned and clapped as Okuro caught and juggled the other vase in with the first one. He watched them float around for a moment, not even realizing that Okuro was trying to levitate Chaca too.

Chaca's feet didn't move, they remained firmly planted on the ground below him, the force deadening out just around him before they could begin to lift the boy. Though a force user could easily push over the pillar next to Chaca, they wouldn't be able to push or lift Chaca directly

To most force users, Chaca would feel like a gap in the force as they tried to will the force upon him. He didn't seem to have any conscious awareness when the force was being nullified around him either; he was fully content watching the floating vases for the moment.

The boy asked, reaching out to two more old vases on pedestals, tossing them into the mix one after the other

"Ever seen the undertunnels in this place?"

He asked, watching the vases

He struggled a bit, but continued juggling the four vases. "Undertunnels? No, I can't say I have. Why, what's in them?" He asked, setting the vases down on their appropriate pedestals. 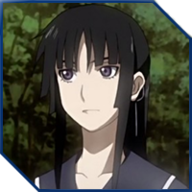 Character Bio
Tana had been stalking the two newcomers for a while not, putting to use his natural hunting traits of a vampire to work, keeping a good distance behind his... quarry? but neither being to close, though the question was why? Well not only was it strange how this [member="Okuro_Ishimoto"] worked around, along with how suddenly people started dropping in on Kasyyyk easily despite the military grade security around the entire planet, but what is more there was quite a hefty bounty on Okuro's head.

The details where vague, but all that was certain was the ex/current/wandering Jedi had bombard Korriban a few weeks ago using some salvaged star destroyer. What was more had almost come straight to the Silver Jedi, kind of joined them and had been wandering around and meeting strange people left and right. If the money as not enough the threat he brought to the order was, and besides... would not be the first Jedi Tana had killed, after all that was what he was trained to do, kill force users.

(How many people are trying to kill Okuro? This is like, the fifth assassination attempt this week.)

Character Bio
For the moment Chaca seemed blissfully unaware of Tana's presence, unable to feel others presences as force users could. Had Tana gotten close enough, Chaca may be able to pick up his scent or the sound of him, but right now the boy simply had no idea they were being watched

"I don't know. You gotta be a force user to open the gate. Wanna see what's inside?"


The boy asked gently, crouching once more as his tail swayed a little. He was always up for an adventure it seemed

[member="Chaca"] "Sure, let's go! Lead the way!~" He said, also unaware of the assasin's presence, for now at least. He walked with the boy, excited to figure out what was down there. He always liked a mystery! [member="Tanaski Yumi"]

Character Bio
The two seemed interested in opening a door, maybe to someplace secluded and dangerous? maybe it was worth a shot, he was not really keen on getting rid of the cat person, but if he interfered, well what could you do. 'Question what weapons, poisoned tipped throwing knifes, sword, frock push into a wall of some sort? hmmm best just keep a low profile until a chance arises'. If not he could always just walk up to them like friend and give a small dose of aura drain to [member="Okuro_Ishimoto"], slowly sap his strength until death... actually that could work, and not kill him outright.

Tana could drain his energy, turn him into a trawl, send message of his death, then give the energy back without having to make a mess... still the cat person was a problem. [member="Chaca"]

Character Bio
Chaca bounced a little excitedly as Okuro agreed to come along and explore the depths of the temple. He moved along, standing to full height once more and walking along beside the human. A large grin was upon his lips, his claws clicking on the hard floor as he walked, thinking about what they may find

He paused, glancing back for a moment, looking around. He couldn't see anyone following them, Tanaski being well hidden. Chaca looked around to remember where the entrance to the temple depths was located, then once again began moving forward with Okuro.

They would stop in front of a rather ceremonial looking wall. Cryptic old ceremonial decor lined an image of battle long past. Most would walk right by it, or admire the mural. They wouldn't realize that it splits in the center and open up to a chamber, if one excerts force upon it in the right way

The boy points at it. He steps closer to it, and runs a finger down the center of the mural. He smiled widely, stepping back and out of the way. He looked from Okuro to the mural

"Okay can you use your powers and push it apart?"

[member="Chaca"] "Yeah, probably." He said, extending his hand as it opened apart slowly. While doing so, Okuro made a loud long fart sound effect. "Sorry, the door's been holding that in for years~" He grinned as he fully opened the door

Character Bio
Chaca giggled a bit as Okuro made his joke, and then leapt into the corridor after the door had been opened. A subtle little pulse of force energies would emit from the corridor for the most fleeting moment after the seal had been broken. It would feel like a mixture of both dark and light side energies to some who are force sensitive, but Chaca felt and noticed nothing.

He looked around excitedly, tail lashing as he walked just a little into the long hall-like corridor. It was around 10 feet wide, leading downward to some sort of lit room below

Chaca whispered, looking back at Okuro, and then toward the lit room down at the end of the corridor

[member="Okuro_Ishimoto"]
You must log in or register to reply here.

Exploring the Stars (pm to join)