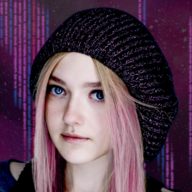 Character Bio
Stars. The galaxy was full of stars. Stars on the holovision, acting in the week's latest dramas. Stars on the holotunes, singing the new greatest hit. Stars in symbols and sculptures and paintings, metaphors for the artist's inner passions. Stars in the sky, with one burning fiercely in the day and many twinkling and winking in the darkness of night.

She watched the only star she knew with any certainty stretch and vanish as the deckplates beneath her shuddered, signalling the ship's jump into hyperspace. Bringing her knees to her chest, the young Human girl named Daiya wrapped her arms around them, indulging in the closeness they provided her, a last grasp for familiarity as everything else she knew was ripped away.

The only other familiar presence in her life was seated in the chair opposite the door, an OS-109 rifle slung across his hairy lap, guarding the entrance into the bunk room they had rented. The transliterator was still slung across his chest, its blackened and broken from a souvenir from their escape. The Wookiee's eyes watched the door, almost without blinking, as if it would burst open at any moment. As if somehow, her enemies were aboard and just waiting until they were trapped in hyperspace to make their move. As if Phelaan were still alive.

Memories flooded back to her in waves. Their capture by his goons. The order to kill them coming across their comlinks. The goon raising his gun at her. Hearing the shot, and seeing the smoking gun hanging in midair. Weeks of hiding. Spending time on the HoloNets. Arranging the meeting. Being welcomed into his house, offered refreshments. Pointing the blaster at him. Smiling as she watched Phelaan slump down in his chair, a single hole through his forehead.

No, Daiya was certain, there was no way he was still alive. Phelaan was dead, every fiber of her being told her so. And still, he sat before her, his great hands clutched around the rifle, his back straight and poised to leap up at any moment. Tawrrowaldr was her ever-vigilant protector, brother, friend. If she wasn't so anxious herself, she might have smiled at the thought, but instead she gripped her legs more tightly. Staring straight ahead, the girl took a slow breath in and then let it out, the exercise she used to focus when she was trying to focus enough to draw her visions.

"Tawrro," she called to him gently, her voice sounding much calmer than she still felt. He didn't look at her, but she knew he was listening. His body hadn't changed, he hadn't even moved a muscle, but it was as if his whole demeanor changed. As if her voice was a reminder to him, a reinforcement of his purpose or perhaps simply to let him know that she was still there. Daiya told him the only thing she could think of to reassure him. "He's dead. They're not coming."

The Wookiee growled at her, a rolling warble sounded from deep in his throat, but he still stared at the door. She sighed in response. Even without the transliterator, the girl had picked up enough Shyriiwook to comprehend basic conversation with Tawrro. "I know they could have. But I don't think so. I don't feel anything. I don't see anything."

It was true, Daiya hadn't gotten a vision since before she went to meet with Phelaan. The last one she had was what made her go in the first place. Even with the help of a contracted hacker, the times of his schedule known, the whereabouts of his lieutenants established, and everything else seeming to line up, the girl had not been sure about following through. There were so many variables, so many possibilities that it would go wrong. But when the vision came on, like so many of them did, with a sharp pressure just behind her forehead, she knew that she would be all right.

Tawrro replied, a few sharp barks interspersed with a growl. He did have a point. She didn't see the butler who welcomed her in, she didn't see Phelaan coming, or him dead, or her leaving the house alive. There were things that could have gone wrong. But he didn't know her visions like she did. Sure, he saw what she drew sometimes, and what she told him, but he never truly saw. "Yeah, but that doesn't mean anything. I don't have a time machine, I just get glimpses."

Another growl. Now he turned to look at her, his face drawn both stern and concerned at the same time. That was the same face every parent had somewhere in their repertoire, dug out at times when a child did something truly dangerous and stupid.

"Because it hasn't happened yet, that's why!" Daiya insisted. She turned to look back out the viewport, even though there was nothing there to look at. The vortex of hyperspace churned by, small fluctuations and random patterns visible in the streaming show of lights, but nothing to hold her interest. Still she stared at it, refusing to meet his eyes. The girl felt the bed sag as his weight added to its burden, the rifle propped against the wall now. He growled softly.

"They usually do, though." No, she lied. They always came true, one way or another. That's what really scared her the most, even as she had come to rely on the mysterious visions. They had been harmless at first, or helpful at best. But more and more, the things she saw terrified her. Some people had nightmares while they slept, she had nightmares during her waking hours.

Daiya felt a weight on her shoe, and looked down to see Tawrro's hand there. His shaggy coat gently tickled her bare ankles. A younger version of her would have laughed at the sensation, and Tawrro would have used it to further tease her. When she realized that, the frustration burned in her heart. It felt like all of her happiness resided only in her memory. She kept her eyes down, unwilling to meet his.

His finger reached below her chin and lifted it up to his eye level. She looked at him reluctantly, waiting for whatever would come next.
You must log in or register to reply here.