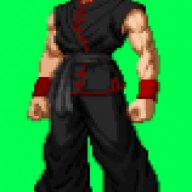 Strengths and Weaknesses: Expert handling of Tonfa, Batons, Billy club, Nunchaku, Bo Staffs, Swords and Daggers. Can fight blindly without any issues due to his extrasensory abilities using force and body senses. Sucks at using long range weapons like guns. He often removes emotion from the actions he does as he thinks it is detrimental to the act he is performing and often might seem like a robot or a cold blooded person.

Appearance: Wearing a sleeveless Taichi Uniform along with a sword at the back. The uniform is black and red in color with red color being the button area. He has red armbands and blue boots. He has blue hair, 6 foot tall and well built. He also has light brown eyes, tanned skin with 65 Kg of weight.

Biography: As a kid he had the desire to learn a lot of martial arts. He then went on to learn various martial arts later being proficient in Physical weapon combat. He discovered that he was force sensitive one day as when he was meditating he moved a brick. After some inquiry with few of the martial artist he discovered the Jedi and other force users. Now he wants to be a master of the Jedi way thinking of that as a goal that he wants to complete.

Ship: Its an RV, which has a sleeping area kitchen and a bathroom. It also has faster than light travel capabilities, low fuel consumption and top grade weapons like lasers, missiles, energy fields and rocket launchers to fight any intergalactic threat that might endanger the person inside. There is also an escape pod which in case of massive damage to the RV can be used to escape.
You must log in or register to reply here.