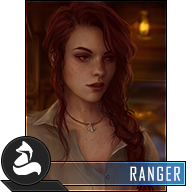 Character Bio
The sound of the firepit crackled through the drips of rain that patted against the muddied ground that had begun to cover the small group’s boots with dirt and grime. Thunder rolled above in the distance yet was somewhat muted by the rustle of the winds as they dragged themselves through the branches and leaves above the group’s heads. Around the small camp there was an air of joviality and care that could both be heard and felt through the air that simmered between those who had come to attend the excavation.

It was a small excavation, but one that had managed to catch the attention of several different Jedi orders nonetheless. There was no real expectations that they would really collect anything of real importance here, but it was seen as a good way for people of different cultures to meet and exchange their views on the force and other philosophies. Most attendees seemed to be Padawans, but there were a few Knights or even Masters thrown in there for good measure. All in all, it was a good time for those who attended even if the weather wouldn’t seem to imply as such.

That was, what it would seem to imply for most. Vera had grown up with rain aplenty on Kiara. While the others had sought out the portable, makeshift homes and shelters that their orders had set up she had remained out in the open to poke at the fire and seek warmth in the best way she knew possible. It reminded her of home, and given the way the galaxy seemed to be at the moment she’d take any chance she got at reliving those memories again.

Sadly Vax was not here, but with all the mud around that was probably for the better. It was always nearly impossible to get this kind of mud out of his white fur. It took baths for days, and quite frankly they could both do without those.

Poking at the fire with a stick she managed to get it to catch on fire. Vera raised the burning tip in front of her and squinted at the glow before she blew it out and went right back to poking at the heat again. She didn’t mean to seek solitude like this, it was just a habit. Made it easier to hear the sounds of the wildlife around you, and for the moment it seemed like a great majority of said wildlife was asleep for the evening. At least the diurnal ones. The hunters had certainly come out to play, but for the time being Vera felt none in their immediate area.

“Should have brought mushrooms to cook.” Vera mused quietly to herself and held the stick above the fire as if to cook something. “Maybe I should go forage tomorrow…”

Her head bobbed. “First light, foraging. Then excavating the ruins up ahead. Sounds like a good plan.”


[member="Jyoti Nooran"]​
You must log in or register to reply here.