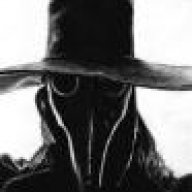 STRENGTHS AND WEAKNESSES (Required: 2 Weaknesses Minimum) :
Strengths: Has a working knowledge and intuitive ability to predict the outcomes of his plans and the reactions of those around him. He is a highly able and skilled scientist of multiple and varied subjects, capable of thinking 'outside the box' in almost every way. Agnusdei is well trained in hand to hand combat focusing on delaying and escape forms with a working knowledge on ranged weaponry. Finally, Agnusdei is also a skilled engineer of various specialties and has an extensive knowledge of sentient psyche and how to take advantage of such.

Weaknesses: Agnusdei is incapable of extended melee or a cornered fight as he always attempts to disengage and retreat in hand to hand. When faced with a foe that outmaneuvers or outwits him, Agnusdei will immediately cut his losses and retreat to reassess and recalculate his plans. Agnusdei dislikes direct control on his work and will often butt heads or outright ignore his "superiors" should their demands or orders contradict with his work. While he retains a working knowledge of ranged combat, he has little to no actual practical experience with such.

APPEARANCE:
Agnusdei appears as a tall, thin man wearing black clothing. He wears a black cloak, shoes, and gloves showing no skin whatsoever. He also wears a black, wide brimmed hat and a bleached white, long beaked mask with mirrored lenses. He carries on his person a variety of tools and equipment, the most prominent of which is a thick, black, metal cane of an unknown and highly durable material.

BIOGRAPH
Little is known of Doctor Agnusdei before his appearance in Imperial records. Many believe he is a crackpot scientist cast out of the scientific community for his controversial work. Others believe he is a sociopathic mastermind hell bent on twisting the galaxy to his doing. All that is known for sure, however, is that the man cares little for morals and virtue and believes only in cold, hard facts. He will stop at nothing to achieve his goals and many of his personal experiments consist of those individuals that have stood in his way...